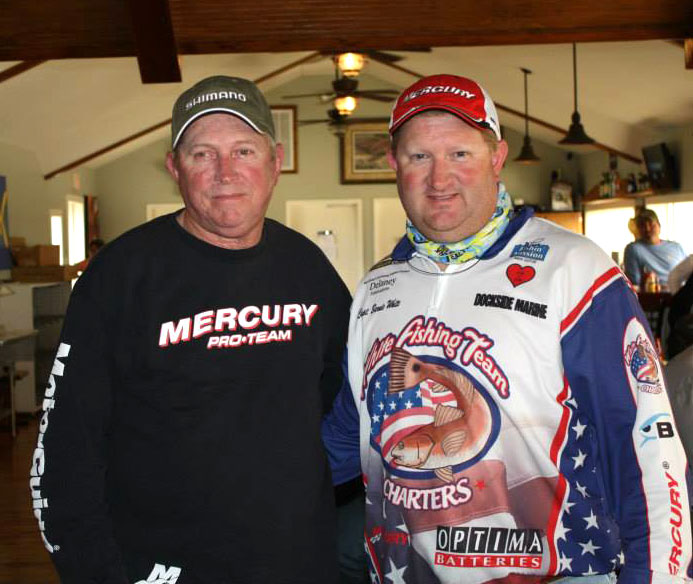 “This tournament trail is put on by the Louisiana Department of Fisheries,” Barnie White said. “It’s been going for four or five years. It’s a family oriented trail – my father and I have been Team of the Year a time or two, and my daughter is starting to fish it with me, too.” 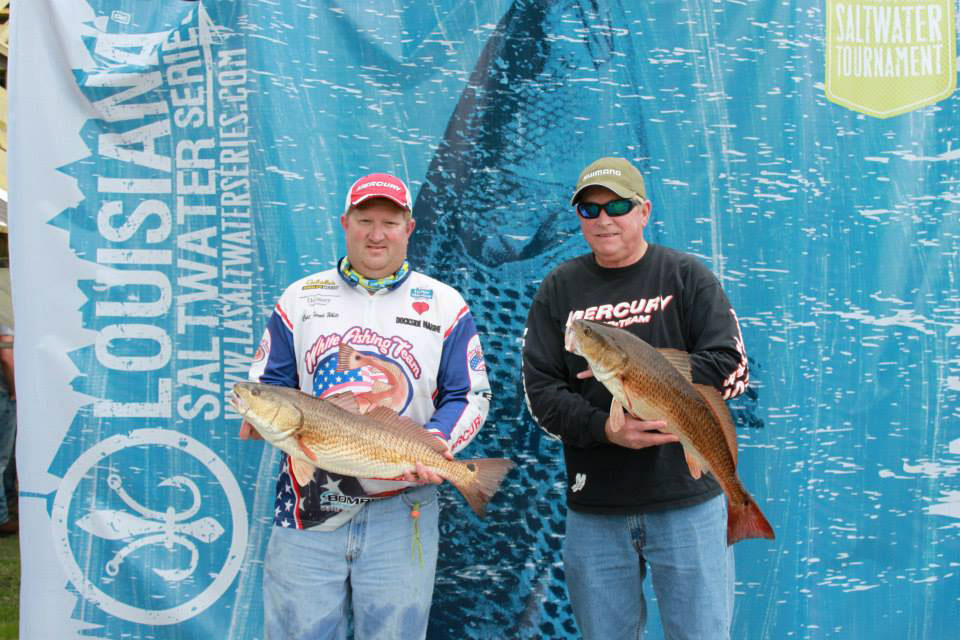 The season kick-off tournament was held March 8 out of Boudreaux’s Marina in Cocodrie, La. During prefishing for the tournament Barnie found some fish in shallow, weedy water, even though most competitors felt it was a little early in the season to find tournament winners up that shallow.

“We caught two really good ones (in practice) and felt really good about that area,” he said. “The rest of the day we just trolled around and watched redfish play. We probably saw more than 100 fish that day.”

On ournament day the White team fished deeper water in the main channel while waiting on the tide to come in and put more water onto the weedy ponds and flats where they’d found the fish. As the water level rose, the team slowly worked into the flats via ditches that provided enough depth for the boat. It was on these weed-choked flats and slightly deeper ponds where the Metal WhoDat Spoon did most of its damage.

“Once the tide came up about mid-morning we could get into those shallow ponds covered in coontail – it was the thickest I’ve seen in awhile, especially this early in the year. The redfish were in there thick, pretty much standing on their heads tailing. You ran that spoon by them and they would just blow it up.”

The White team wasn’t the only one throwing a WhoDat Spoon. Charlie Howell and his partner (and brother) Hunter, who finished eighth in the tournament, also whacked ‘em on the WhoDats, but the Howell team used the original version manufactured out of high-density plastic molded around a loud rattle chamber.

“We fished water anywhere from 6-inches to 3-feet deep,” Howell said. “With the tide coming in, we focused on the shallowest water we could find.”

Like the White team, the Howell brothers each used a slightly different version of spoon. Charlie caught his fish on the WhoDat Rattling Spinner Spoon, which features a Colorado blade attached to the weedguard for more vibration and shallow-running capabilities, while his brother threw the regular version.

Both teams needed to deliver long-distance, sniper-accurate casts to put the spoon on the right tract to tempt a fish without spooking it. Redfish are quick to flee anytime they’re in shallow water, but early season fish can be especially unforgiving. The lure also had to stay shallow at a medium retrieve speed even at the ends of these long casts, while coming through the weeds without fouling. “Fishing that thick grass – the WhoDats went through it easy,” White said. “Lure selection gets pretty easy in this situation — you’ve got to throw a spoon.”

Barnie White threw the silver WhoDat while his father threw the gold version, and he said it didn’t seem to be a color-specific bite. It was more of the action – the spoon swimming lazily past a feeding redfish – that triggered the strikes.

“You can retrieve that spoon so slowly to get that swimming action even in very shallow water,” Howell said. “In that cold water, the fish needed to see the bait for a longer time to get them to strike.”

Both teams reported nearly flawless performance by angler and lure during the tournament, with the only lost fish credited to human error, not mechanical failure. Charlie had one fish hit the spoon and charge toward the boat while he was adjusting the trolling motor. He just couldn’t catch up to it to get a good hookset.

“I use the same baits for regular fishing as I do for tournaments,” Howell said. “I just cut them off and toss them in the tackle box. I’ve got some WhoDats that I’ve used for three or four consecutive fishing days without a single problem.

Redfish are well known destroyers of inferior tackle, from tearing up cheap reels to straightening hooks and even breaking weak lures in half. Finding a lure that performs perfect for the situation and is tough enough to take on tournament reds can be difficult. “I’ve used spoons in this situation for years, but these redfish are tough and you could always expect the spoon to break or fail sometime during the day,” White said. “A lot of times the weedguard is the first to go, and then the bait is useless.”

The Metal WhoDat’s weedguard is constructed out of tough nylon instead of the cheap wire used on other spoons, and is attached to the spoon via a screw rather than the more-common (and less durable) solder. It also splits into two toward the hook and each end is tipped with red beads that mimic a pair of beady shrimp eyes.

In addition to the weedguard, Bomber Saltwater Grade also eliminated the solder from the hook attachment as well. Its genius positioning through the tail of the bait and a secure screw attachment make the WhoDat incredibly tough and reliable.

“Durability is a real consideration when selecting a spoon,” White said. “We caught a bunch of fish and the WhoDats never failed.”