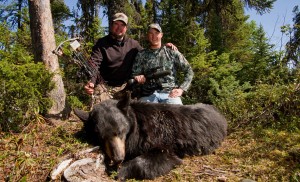 While spot and stalk is an option for black bear hunting in some western States and Provinces where there is more open range for spotting, the heavily timbered Canadian Shield typically requires baiting sites.  Canadian spring black bear hunting in both Manitoba and Saskatchewan offer an outdoor overdose for hunters and anglers.  Long days are often combined with close proximity to incredible fishing with evenings and mornings capped off with bear hunting.  It’s the ultimate cast and blast experience if you love to both hunt and fish.

Hunters typically wait in tree stands over the site, which is really conductive for archery.  Baiting the perfect location with barrels of frosting and other sweets however doesn’t necessarily guarantee that a bear will visit.  Bears have a lot of other forage options that can vary from season to season.  In the far north, suckers running up extremely small creeks provide spring bears with an unending supply of protein.

For many archery hunters that have cut their teeth on Midwest whitetails, hunting these remote north woods bear is a completely different but exhilarating style of hunt.  The location is so far north that there is only about three hours of twilight darkness at night.  There is about twenty hours of daylight each day.

“We typically went out to the stand at about five in the evening and just hunted the evenings till about eleven at night.  During the day, we spent a lot of time fishing and napping,” explained Jason Mitchell who hosts the outdoor hunting program, Passion for the Hunt.

Russ Bettschen and his family have operated Wolverine Lodge, a drive to destination near Lynn Lake, Manitoba, for over thirty years.  Fly Inn Outposts are also available out of nearby Lynn Lake Outposts by the same family operation.  This is one of the furthest north drive-to camps, virtually the end of the road.  There is also no doubt that you will drive by plenty of bears, pike and walleye, but the remoteness and quality of both the hunting and fishing bring bear hunters and anglers to the far north each summer.  Everything seems bigger and better the further north.

Boars also start to roam during the rut, which coincides with the spring hunting seasons.  Russ Bettschen and his staff stack the odds by running several bait sights over a large area, which is a tremendous amount of work.   To cover as much of an area as possible, boats are often used where the bait sites are accessed by water.

Both Mitchell, along with his videographer, each harvested an impressive bear last season while filming.  Mitchell added, “If you hunt whitetails, it can be really easy to over think bear hunting when you are hunting this far north.  Wind blowing your scent towards the bear doesn’t seem to matter for example.  Despite the fact that bears have a much better sense of smell than even a bloodhound, the reality is that these bears haven’t smelled enough people to even comprehend the threat.  The smell of food and the human scent is one and the same.  Just like whitetail hunting during the rut, boars get preoccupied as they begin to cover a large territory in search of cooperative sows.  The boars don’t eat as much and often move in and out of bait sites relatively fast but they will still often check out bait sites for signs or sows in the area.”

Outfitters like Russ Bettschen are often required to use ladder stands just because many of the trees are small at this latitude.  Russ also keeps the ladder stands closer to the ground at about ten or twelve feet up for a better double lung shot on a bear.

“Bears are an easy animal to kill with archery equipment, explains Russ but a mistake that has happened to many bear hunters is shooting too far forward where the arrow hits the shoulder blade.”   Bettschen strongly recommends fixed blade broad heads that have a lot of kinetic energy for punching through bone if necessary.  The shots are close often less than fifteen yards.  Cribs are set up over the bait site to hopefully direct the bear so that it stands broad side while slightly angling away.  The best-shot opportunity often occurs when the bear lifts its facing front foot forward exposing the kill zone behind the shoulder blade.

Another crucial piece of equipment in these north woods is a Thermacell.  Bring plenty of mosquito repellent and don’t worry about the bears smelling you, the key to success is simply staying on stand over good bait sites and without any mosquito repellent combined with a Thermacell, there are very few men who could do it.  The number of mosquitoes (especially towards dark on land) is hard to describe.

Hunters from across the United States have made this journey.  Three hundred pound or larger bears will make your knees shake.  Several desirable color phases can be found, including cinnamon, blond and brown.  The number of bears is this region is incredible but with the dense wooded terrain, you can be around a lot of bears and never realize it.  These animals are reclusive and shy moving through these heavy woods like ghosts.  Amazing how an animal as large a bear can slide by below your stand without making a single slight noise.  Not one leaf gets moved as their large padded paws step over moss and limbs.

Perhaps Jason Mitchell sums up the northern Manitoba bear hunting experience best:  “Bears are just an incredibly cool animal to observe and watch, and they will absolutely make your heart race because they are so quiet where they seemingly sneak up on you.”  Watch the video at:  https://www.youtube.com/watch?v=okAOk8LOe-4

When you combine bear hunting with the high quality fishing experience typically available in this part of the world, the entire day is the equivalent of a hunting and fishing overdose.  According to Russ Bettschen, Wolverine Lodge is located on a premier trophy pike lake where anglers routinely see pike over forty inches with fifty-inch fish verified.

“There were times where I would make twenty casts in a row, added Mitchell, and catch a walleye between eighteen and twenty four inches on every single cast.  If I missed a fish, another fish would bite a few cranks later.  It truly was absolutely incredible.  A long drive for sure but worth every effort.”

With twenty hours of daylight each day, it is very possible to gain status in northern Manitoba’s “Exclusive 300 Club.”   Catch at least 300 fish in a boat in a day and shoot at least a 300 pound boar in the evening, and you too can be a member.

By Jim Cunningham, Passion for the Hunt Television