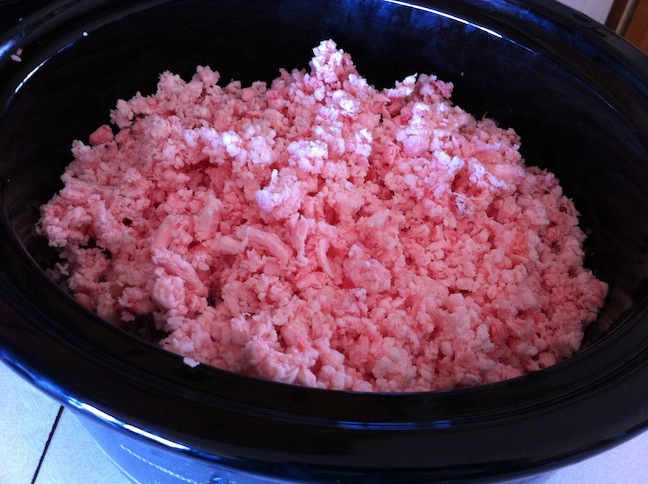 As you know, I’m venturing into meat animals. I had a brief and unfulfilling foray into chickens (Too stinky. Too hungry. Too poopy) and now I am raising meat rabbits. I’m also considering the prospect of a larger meat animal for next year, maybe a pig (the husband is not keen, as he doesn’t like pigs, but he does like bacon – a lot – so I may have some purchase there), maybe a feeder steer, maybe a small expansion into meat goats. For now I’m casually glancing around to see if anyone wants to trade something for a calf for this year, because I have recently discovered that cows are not just hamburger and steak.

Upon finding that my baby is allergic to many soaps, I started to look into making my own from goats milk, and took advice from a professional soap-making friend, who advised the use of tallow. I looked at buying some, I searched online and I was about to call Whole Foods to find out if they sold it when I realized: I can make my own. Quick call to the local butcher confirmed that he had a pile of fat I could have, so I sent the husband down to pick it up and fired up the crockpot.

I chilled it super hard to make it easier to work with, and trimmed excess meat off – but there wasn’t much. Then I threw it in the food processor in batches and whizzed it until it was roughly chopped.

Then into the crockpot on low until the fat was all melted and the impurities had floated to the surface… I have a 6qt crockpot and it was just over half full, and it took around 3-4 hours.

This tallow is versatile stuff… I’m sure I’ll find some more uses for it in time!