Home/Top Stories/Post-Spawn Walleyes Down and Out Technique 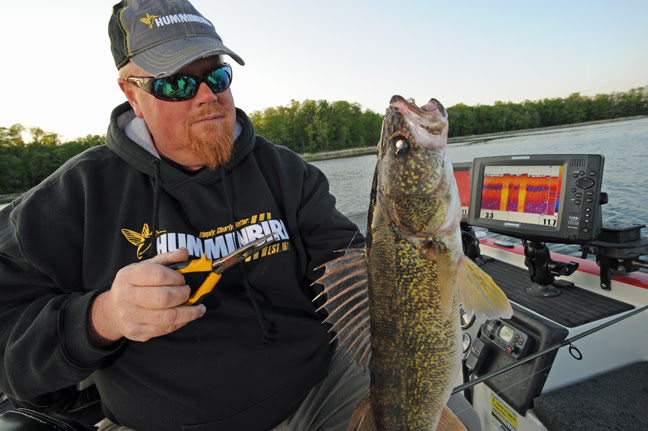 Professional fishing tournament twosome Tommy Skarlis and Jeff Lahr are no strangers to catching walleyes from fast-flowing waters, including the Mississippi River in Hastings, Minnesota. In fact, it was in this area—within the fish-laden Pools 2 and 3—that the band from Iowa took top honors at the Cabela’s Masters Walleye Circuit’s “Artificial Challenge” May 2-3, 2014.

But the bite did not come easy.

The fact was their 35-pound 8-ounce total two-day sack consisted of only six fish; with only two landed the second day.

Had it not been for the duo using high-quality electronics to locate specific-spots where the post-spawn females were laying, figuring out fish wanted lures pulled one way and one only, as well as using rods that aided in identify bites that would normally gone undetected, the tournament teammates would never have taken the podium.

Think outside the cone

Unable to pre-fish much before the derby, Skarlis and Lahr were depending on two choice areas where they had found fish a few years before with an Aqua-Vu underwater camera. 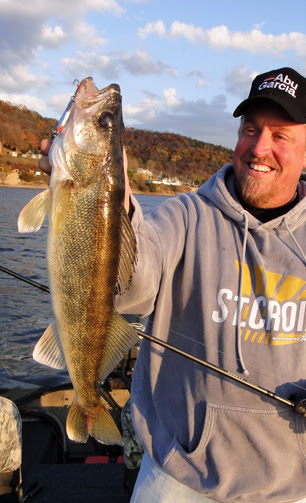 “After spawning, big hen walleyes tend to belly up to bottom right on the steep drop-offs leading to the main river channel. Unfortunately, it’s this type of area that a one-dimensional sonar’s “ping” often misses the mark (fish on bottom on sharp banks being just outside the cone-shaped signal),” says Skarlis. “Without an Aqua-Vu underwater camera, or Humminbird with two-dimensional Side Imaging, anglers would never realize those fish were there.”

On this particular trip, Skarlis and Lahr were able to verify the walleyes were still there with Humminbird Side Imaging; the fish lying tight to bottom showing up clearly on the 1199’s unit’s large screen.

But confirming the location of the fish wasn’t enough; the lethargic post-spawners were still not willing to eat, but rather had to be coaxed into biting.

The pair discovered they had to employ very specific procedures to produce strikes. And then after all that, the bites were so subtle they could’ve been easily be missed.

The winning way? Pulling 7- to 12-MM long, slender-shaped stickbaits upstream at a crawl. However, only when the lures were swimming down the bank and out towards the main river bed, not up the break or along it, did walleyes respond.

Not wanting to waste time, Skarlis used his bow-mounted Minn Kota Fortrex to quickly pull the 3-ounce bottom-bouncer rigs with stickbaits up the steep breaks in 16- to 22-feet of water, and then reduce their speed to a creep at one-half-mile-per-hour. The slower speed was necessary to get the walleyes to commit.

A secondary technique took fish when the stickbait bite slowed. When the cranks quit, Skarlis and Lahr vertical jigged down and out along the same sharp breaks with 1/2-ounce jigs tipped with soft plastics.

“While most anglers use the lightest jigs they can get away with, Lahr and I often use heavier jigs, up to 3/4 ounce, as they displace more water and the fish are able to pick up the vibration through their lateral lines. Using larger jigs is doubly important in such stained water,” notes Skarlis.

Jig tied up and deployed, the anglers found the best technique was employing no action all, literally just holding the bait up off bottom a few inches and working it down the bank.

No matter the technique, there were never any arm-jarring strikes. In fact, the bite was quite the contrary.

“Most anglers feel the spit, not the hit, and by that time it’s too late to set the hook,” states Skarlis.

“St. Croix’s LegendXtreme rods were one of the biggest factors in the win. The fish would bite light and swim along with the lure. If anything felt “odd”, anything at all, we’d set the hook and sure enough there was a fish.

“There are three reasons the Legend Xtreme is a superior rod,” claims Skarlis. “The blank is ultra-sensitive, of course, as well as light, so there’s no arm fatigue when fishing it all day. And the rods micro guides cut down on wind drag, keeping the tip from blowing around, creating even greater sensitivity. And because of its perfect backbone, they have the ability to hold fish on the hook once stuck.”

Looking to land more post-spawn walleyes from rivers? Heed the down-and-out technique Skarlis and Lahr used to land a winning weight from the Mississippi. Use the newest electronics to locate fish hidden from standard sonar, and no matter the method employed, use sticks that telegraph even slight bites.