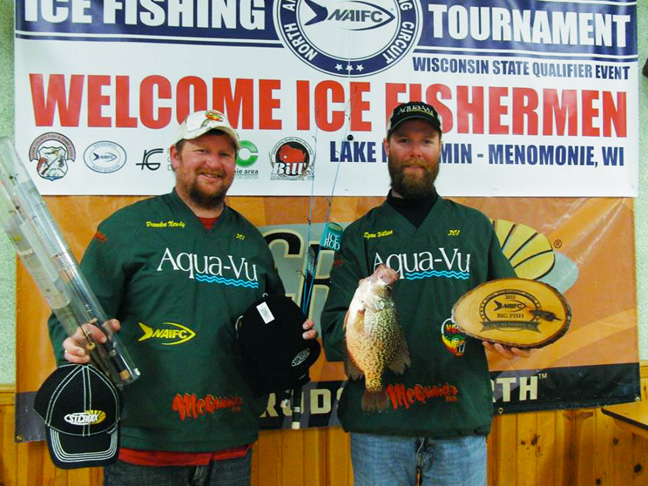 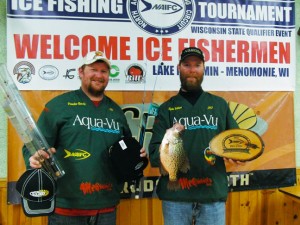 In the early 70s, the legendary Martin won three straight Angler of the Year titles on the B.A.S.S. tournament trail, while KVD earned four in a row between 2008 and 2011. On the surface, comparing the big game of competitive bassin’ with the more regionalized sport of NAIFC ice fishing tournaments seem like a stretch. Consider, however, that ice fishing is the fastest growing segment of the sportfishing industry today, with a nearly 60-percent increase in nationwide ice tackle purchases within the past five years alone.

“It’s amazing to step back and see just how fast this sport is growing,” notes Newby. “In a few short years, competition has increased tenfold. Everyone has an Aqua-Vu now; it’s such a key tool for finding fish; it’s really revolutionized the whole sport of ice fishing. But we can’t give up all our secrets. Ryan and I are working with a new technology right now that could blow the lid off the whole works by next winter.” 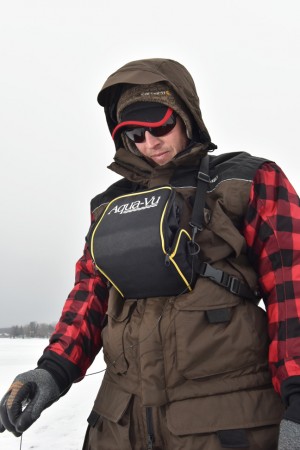 Indeed, for Newby, Wilson and a handful of other successful teams on the NAIFC trail, success has been closely linked to innovative new tackle and technology, much of it inspired by the competitive anglers themselves. “This past year, we worked with Aqua-Vu to design a new Pro Viewing Case,” says Newby. “It’s an awesome piece of wearable underwater viewing gear that’s a huge aid in finding fish and productive structure.”

But before ice even forms on tournament lakes, Newby and Wilson often run Humminbird side imaging sonar in a boat, logging GPS waypoints on spots with high potential. Then during tourney pre-fishing, the team hits the ice, and routinely bores 600 to 800 holes per day. They employ a tandem approach of drilling with Milwaukee M28 hand-drills and viewing the underwater real estate with Aqua-Vu Micro cameras.

Beyond added convenience and portability, Newby says the new tournament-inspired Pro Viewing case lets them survey spots with stealth and secrecy. “Often, it’s not enough to find fish. The trick is to keep our spots secret until game-time.” It sounds slightly like paranoia overkill until you consider the virtual red Xs painted on the dynamic team’s backs, as a result of winning so frequently.

“Last year at Croton Dam Pond, Michigan, we had the tournament winning location entirely to ourselves,” says Newby. “When we arrived this year, a hundred people were already in our spot. It forced us to look to alternative locations, into deeper water, where after drilling for two days, we finally found another untouched school of nice bluegills.”

A few weeks earlier, at Mitchell Lake, South Dakota, Newby and Wilson arrived in anticipation of a big panfish bite. But news of a major winterkill the previous winter immediately hit home when the anglers found hoards of tiny crappies in every hole they drilled.

“Viewing with the Aqua-Vu at Mitchell,” recalls Newby, “we quickly realized that in order to win there, we’d need to target bluegills, which were slightly heavier than the stunted crappies.” The ‘gills, however, proved many times more difficult to find. 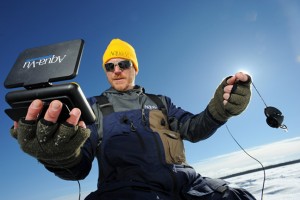 “Seems like we drilled a million holes in prefishing. But by targeting key structures identified on our LakeMaster digital map, and then zooming in with an Aqua-Vu camera, we finally located a single submerged tree that held some larger 7 to 9 inch sunfish.”

To make the determination, Newby and Wilson executed another maneuver within their game-winning bag of tricks. “One of our secrets has been to record video clips at each location where we scope fish. We use the DVR recording function on our Micro cams, and when we return to our hotel rooms at night, we’ll spend time studying the footage on our laptop computers. Using this valuable intel at Mitchell, we were able to determine that one specific tree held 8-inch sunfish, as opposed to the 6-inchers present everywhere else.” Their efforts culminated with the team’s seventh tournament win since 2009, and solid standing in the Team of the Year race.

On March 8, at the final qualifying event at Lake Menomin, Wisconsin, Newby and Wilson scratched out a 3rd place finish capped by a 1.35-pound Big Fish winning crappie. It earned them enough points to edge out the competition for the team’s third straight Team of the Year title.