Home/HSO INSIDERS/Lake of the Ozarks Catfishing Tournament: How to Bag the Beasts 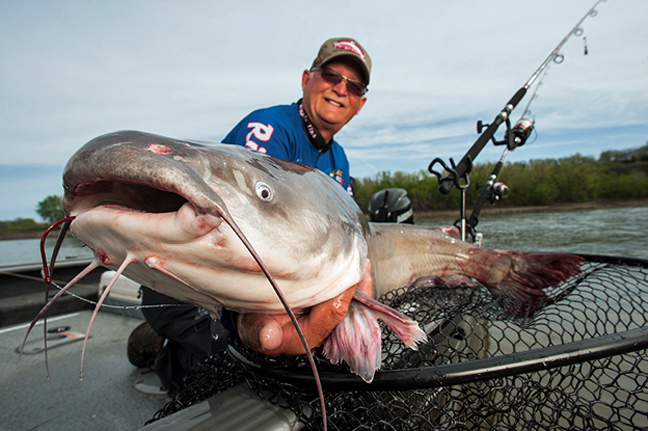 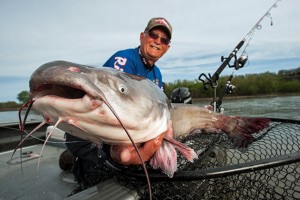 In competitive catfishing, the trendy little axiom most commonly heard in sporting circles, “Go big or stay home” means bringing ‘shoulder-dislocating’ sized catfish to the scales. The most recent example of this knack for going beastly was at the KC Catfish Tournament in late March in Rocky Mountain, MO on Lake of the Ozarks.

Optimistic anglers launched from the Coffman Beach Access contemplating their acceptance speeches and what bills to pay down on their earnings. Fact of the matter, though, was that the river played tough and some boats posted zeros.

This wasn’t the case, however, for Rippin Lips’ John Jamison and partner Mark Thompson. The going was tough, but the tough got going.

“Until 1:30 in the afternoon, all we had to show was a half-pound channel cat,” said a befuddled Jamison. “Then all of a sudden it was on,” said the same catfish-menace with a tone of rejuvenated confidence.

Literally, in less than an hour-long span, Jamison and Thompson boated a bushel of mega-blue catfish. “We caught scads of releasers,” he said. “We put back a dozen 20-pound catfish. Lake of the Ozarks has a 26- to 34-inch protected slot, so even fish weighing up to 22-pounds had to go back.”

Fortunately, mixed into the firefight of 20’s, they yanked legal cats, including what turned out to be Big Fish with a 59.60-pound specimen, earning Lund Boat’s Contingency Bonus. (Jamison and Thompson run a mammoth Lund 2075 Pro Guide – the quintessential catfishing warship.) Oh, and cumulatively, their bag scaled over 108-pounds, claiming second place overall. 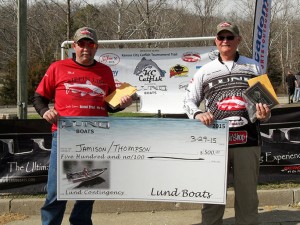 Patience of a Bow Hunter

Besides your friends, family and maybe an obsessed fan or two, the average Joe doesn’t get too caught up in tournament results. But what they do care about is how a winning angler put fish in the boat. To that, Jamison willingly spills the beans.

Blue catfish stereotypes place them in river basin abysses and wallowing beneath power dams. At times, blues inhabit these areas. But right now, in early spring, and as Jamison and Thompson discovered, the fish ranged much shallower.

“We anchored in 12-feet of water, in casting distance of a 6- to 8-foot flat and 15-foot deep channel,” explained Jamison. During the day, said Jamison, blues lay in channels until they decide it’s time to feed. The blues bum-rush flats to scarf down shad and other edibles. So from their anchored position, Jamison and Thompson could reach both environments.

Not surprisingly, 90-pecent of their catch came off the flat. “They eat so much, and so fast, you better have lines down on the flat at all times,” said Jamison, who anchored as patiently as a bow hunter waiting for the money shot.

This time of the year, Jamison prefers cut bait over live offerings. “We used fresh-caught shad cut in 6-inch chunks, and sliced their tails so the bait would bleed.” But the shad alone weren’t the winning formula. They would soak the pieces in Rippin Lips Scent Trail to exaggerate the shad’s attractive taste and natural smell. Scent Trail, he notes, performs wonderfully as a marinade for all sorts of baits – live, cut and dip – on all species of catfish.

Despite the size of the catfish, Jamison put to use moderately powered rods. “We fished Rippin Lips Medium/Heavy SuperCat Casting Rods. The tip is soft enough so a fish can fold it over, yet has enough strength to fight big fish.”

These same rods, said Jamison, are fished by many of the top tournament catfish anglers. In fact, the winner’s circle at a number of recent events had SuperCat paw-prints all over the place.

Nothing indicates Jamison & Co.’s beast mode will end anytime soon. Plenty of tournaments on the schedule, too. Expect to read more about the Rippin Lips crew’s conquests this summer.