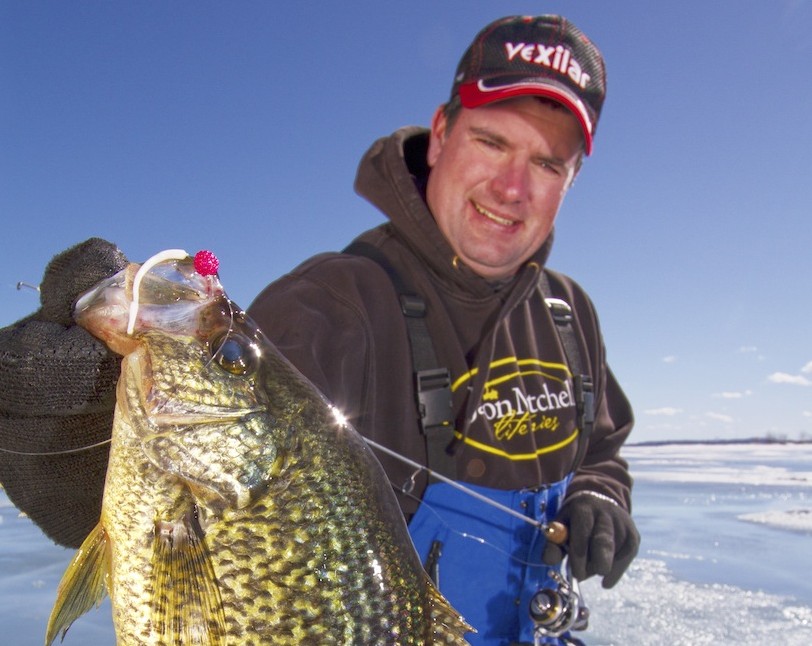 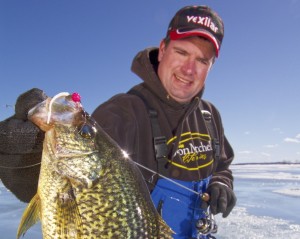 We believe that anglers are overlooking one of the most obvious places when they are ice fishing crappies: some of the biggest crappie and sunfish can be found high in the water column, right under the ice.

There are many situations when high under the ice patterns shine, especially for big fish.  I have my own opinions and theories, but I believe we often have success when we are  ice fishing crappies right under the ice, because the bigger fish feel more confident and safe whereas the small fish don’t seem to like to leave the security of either the school, weeds or bottom and be silhouetted.  Big fish also get to you faster, so if there is a pack of twenty fish swimming say ten feet down and they rise up to investigate you… guess who gets to you first?

The reason today that high fish are so often overlooked is because when we use sonar, the cone angle is often merely a few feet wide at the most for the top six feet of the water column.  If visibility allows, anglers can often sight fish for high fish but there are also a few adjustments that enable your Vexilar to be more effective when looking for fish that are in some cases a few feet below your boots.  The first step is stretching that cone angle as much as possible.  Drill the holes as straight down as possible and hang the transducer as high as possible in the center of the hole.

Panfish can suspend anywhere in the water column, and a big equation for locating fish and putting together a pattern is dialing in that productive zone.  Before electronics, anglers often fished down through the entire water column.  The edge that sonar gives us today is that we can speed up the process of getting back down to fish, which makes us more efficient.  What also happens as we race back down to a school that might be fifteen feet below the transducer, is that we miss the high fish, or leave fish that might not show up well on electronics.

Sonar is fast and nimble where you can run and gun easily, but underwater cameras like the Vexilar Scout can also be really deadly for figuring out high fish.  Panning with an underwater camera is a great way to look for fish that are hanging below the ice, perhaps the best way.  For actually catching fish, hang the lens so that it down views and just lower the lens in the hole far enough where you can essentially sight fish without needing a dark house.

Some areas offer great sight fishing opportunities and, if water visibility allows, sight fishing inside a blacked out Fish Trap is educational, productive and enjoyable.  Over the past ten years, I have been gravitating towards smaller diameter augers when ice fishing crappies, but sight fishing shallow water, and high fish is still one scenario where I really like drilling a bigger hole as I can peer and see to the sides of the hole so much better.

There are bodies of water where anglers are really in-tuned to fishing high in the water column and anticipate this pattern.  Thus these anglers are set up to capitalize on these fish.  Other regions, other water however and some anglers have trouble fishing in the top tier of the water column, often the result of the pattern not being as prominent.

Some of the best baits for exploring these patterns are often larger profiled soft plastics that not only have a tendency to flip the trigger of big crappies in particular but can also be seen from a distance below.  My confidence bait right now for big crappie high in the water column is a Makki Plastic Jamei rigged onto a Clam Tackle Duck Bill Drop Jig.  I like how this combination swims in the water.  The new Clam Tackle Cavier Jig is another great shallow water crappie killer that really bounces nice when worked and gives soft plastics a nice vibration and action.

When ice fishing, crappies are notorious for riding right under the ice but there are also times when we have seen sunfish and perch ride this highflying pattern as well.  Pressure ridges and ice heaves often attract fish.  Frozen weed fragments hanging from the ceiling of ice are also sweet spots.  Not every day necessarily do you find fish a foot or two under the ice but it happens enough that it should definitely be a pattern to check as you search for fish.  When fish seemingly disappear from the water column as the day progresses or don’t show up in the usual locations, take the high road to some of the biggest panfish caught each winter.