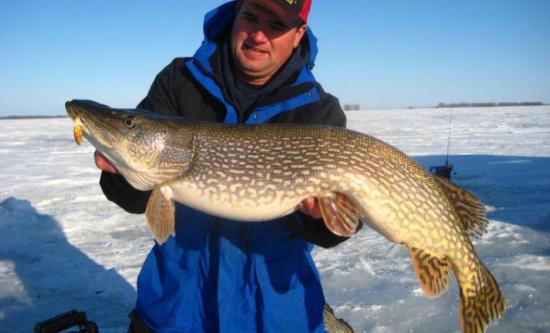 For anglers who enjoy wrestling fish with teeth, North Dakota’s Devils Lake is prime ice. Heavy snow and slush on the ice severely hampered ice anglers last winter so much of the ice fishing activity was limited but barring extreme snowfall this winter, Devils Lake is poised with a lot of potential. According to the North Dakota Game and Fish Department’s net lifts where population densities are determined, Devils Lake contains record numbers of both walleye and pike.

Pike anglers typically do extremely well on Devils Lake and there is always a chance at cracking a forty plus inch fish. The density of pike in some regions of the Devils Lake Basin is staggering. To find numbers of pike, find new water. Shallow bays and flooded fields that are now prime areas. Most of the pike seem to follow the shoreline contours and can often be caught in extremely shallow water along the shorelines. Anglers often use tip ups baited with frozen herring or jig with large spoons tipped with minnows. For targeting trophy pike, classic main lake structure or sharp breaking weed bed edges on the Main Lake Basin, East Bay or East Devils Lake seem to produce many of the larger fish.

What can be really enjoyable is to sight fish for these aggressive predators. I often use soft plastic swim baits like many walleye and bass anglers use in the summer. For these powerful fish, use a stout rod that can handle the weight and power. I use my Jason Mitchell Elite Series Mackinaw Rod in the 34 inch length and pair the rod up with a good bait casting reel. For targeting really big fish, I often use forty pound braid and fish inside a Trap so I can block out the light and look down the hole. Watching these predators tear up these soft plastic swim baits is fun stuff. The speed and explosiveness of a pike’s strike never ceases to amaze me.

Devils Lake is also considered one of the top walleye fisheries in the Country with several fifteen to twenty five inch fish in the system. There are so many different patterns and locations that will hold walleye through the ice season but one of my favorite ways to target big fish is to jig aggressively in shallow water. Many of my biggest fish each winter come from less than eight feet of water. Early morning and late afternoon or early evening are often prime windows of opportunity but when we have heavy snow conditions, we have caught walleyes in less than ten feet of water all day.

These shallow fish are typically aggressive and want the lure or jig pounded hard. Great lures include any jigging spoon or Darters. A sensitive fast action blank like my Jason Mitchell Elite Series Walleye Rod in the 30 inch length is perfect for giving the lure a nice hard snap or stroke to really maximize the flash and thump on most lures. The fast tip also increases the batting average on the hook set as well because while the fish bite really hard, it takes some pop on the rod tip in order to move the lure through the fish’s clamped down mouth and get a hook buried somewhere in that hard mouth.

These shallow fish typically show up on your Flasher fast and a mistake many anglers make is not jig enough. Keeps the cadence or stroke going as these fish often seem to drift off if you stop moving the lure? Walleyes are often underrated as a predator but these fish that are found up shallow often hit with the same intensity as a pike. These fish are aggressive and a lot of fun to target.

Sand and gravel shorelines or flats that drop off to deeper water are prime areas to search. Many of these spots can be even better with the presence of flooded timber or weeds. While Devils Lake typically does not see much of a walleye bite after dark, don’t hesitate to look in water that is less than seven feet at sunrise or sunset and keep noise and traffic to a minimum to avoid spooking fish.

While Devils Lake is notorious for producing enormous perch that sometimes top out at over two pounds, I encourage anglers to not overlook the healthy predator population that inhabits the lake. Devils Lake has matured into a top pike and walleye fishing destination and the shallow water tendencies these fish have in these particular ecosystems create some exciting and enjoyable patterns.