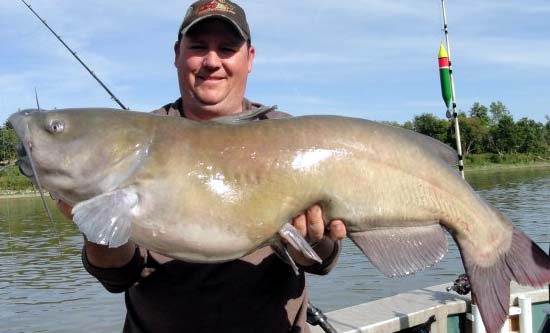 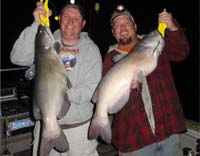 In a nutshell, more of the same that we have become accustomed to in past years during August. Fish late into the night and sleep in late.

We arrived around 6pm on Friday and were eager to get out and hit the water. There was a catfish contest going on all weekend (more on that later) so there was a little more traffic out on the river than in past years. We had wanted to launch in Selkirk as that is where we were staying, but unfortunately the launch there closes at 10pm and that just wasn’t going to work for us. So we ended up launching at a private fee launch near Lockport.

We headed out with our cooler full of frogs and great anticipation. It didn’t take long for John to hook into our first fish. Probably all of about 10 minutes. After we netted that fish it was fairly steady action for the next 4 days. Not exactly lights out but with the size these fish get a couple of fish an hour is all you need to keep things interesting. There were definite spurts in which we had fast action and also slow times.

Some times the fish were biting out in 14 feet of water and other times up in 5 or 6 feet. When we found where they were, we would just cast our lines in that area. 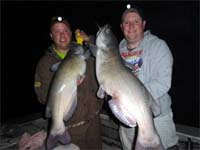 We basically fished in the same exact spot our entire trip as we didn’t want to leave fish to find fish. And word on the river was that the bite was slow so we just went with what worked, fish after dark and sleep in late. There was an obvious window from 10pm to Midnight, almost like clockwork. We did catch a couple of fish up by the St Andrews dam one day messing around trying to catch some Goldeye, but we didn’t spent much time up there at all. Brian caught a 23lber in about 2 feet of water under a bobber. That was pretty cool. On a side note a couple of other crazy catches was John catching a 10lber on a wimpy 5ft creek chub rod and 4lb test (I still cant believe he boated that thing in the current) and Brian some how lassoing a small goldeye on his big cat rod.

We also had a VERY cool display of Northern Lights one night. That was something we will talk about for a long time.

I could go on and on and on about the amazing fishery up there, I have dozens and dozens of pictures of fish over 20lbs, I’ll just share a handful.

Oh yeah about that contest. The chamber of commerce had tagged 3 fish 3 days before we arrived. Contestants then purchase a ticket for $10 and if they caught the one lucky tagged fish (the other 2 were decoys) they would then win $20,000. Imagine our excitement when we had netted one of Johns fish and it had a tag in it!!! As it turns out it was simply a Manitoba fisheries tracking tag and not part of the contest. frown

As I’ve said in past years I cannot stress enough how much I would recommend anyone who loves to catfish to make this trip once in their life. The pictures do not do these fish justice. They are a class all by themselves and even with 40 and 50 pound flatheads swimming around these areas, I would much rather catch 20-25 channels all night long. It is crazy fun!!

Brian caught our biggest fish of the trip at 28lbs, but we each caught a personal best at 26lbs. For comparison sakes to fish around here all those high end 25lb+ fish measured approx 38-39″ long and had a girth around 23-24. We only measured 3 or 4 biggest fish for reference. We did however weigh EVERY single fish. And even with a 3 a 4 and 2 8’s we still ended up with an average weight of almost 18lbs. The total catch for the trip was 81 fish and 1392lbs!

Ok, I’ll quit babbling now and just let the pictures speak for themselves – Click Here Please (YOU can ask questions here too).