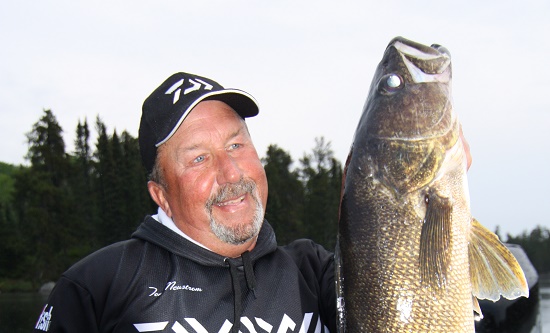 (Crank-tim-a-da-tion): A fearfulness of crankbaits. Lacking the confidence to trust bodybaits. To be utterly intimidated by hard-bodied lures. Ex: “Tom suffered from cranktimidation, not having the confidence to employ the lure even when the fishing conditions were ideal for casting or trolling a crankbait.” 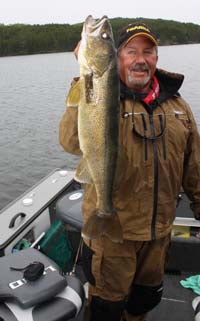 Seems we’re always hearing the term “confidence bait.” It’s the lure you throw with your chest pumped and head full of self-assurance. Might be a jig. Perhaps a spinner and crawler dragged almost pompously along the bottom. Maybe even hanging a leech under a slip-bobber with your chin held high. You’ve hooked walleye after walleye on the technique over the years. It’s the first outfit that hits the water…no matter what. Herein lays the fatal flaw: you’ll stubbornly fish it even when the lake says it ain’t working.

I’ve watched guys drift a jig and minnow infinitely without a bite. Even if another boat passes by engaged in another technique and banging fish – say me trolling a crankbait – they doggedly or lazily stick to their guns. Those would be guns with the wrong rounds that won’t shoot.

Get on the boat, guys. When there’s the potential for catching walleyes on crankbaits, or you’ve actually seen fish with balsa and trebles hanging from their lips, do yourself a favor and make the move. Courageously tie on a crankbait. They can be fished furiously fast or subtly slow; are fun to burn through the water; get fish angry enough to strike when not hungry; and come in such a wide range of sizes, shapes and colors that experimenting becomes part of the fun.

So to get cranked-up, not cranky and fishless, here’s a commonplace summer circumstance where crankbaits rule: The spawn is long gone. Water temperatures are hiking into the 60s and 70s. Walleyes are roaming and ransacking baitfish. Getting fish to attack isn’t science.

Put a bead on long shoreline points, one with inner pockets and a notable plunge into deepwater. Beaten by wind? All the better. It’s been well documented, but always worth restating: Onshore winds relocate entire food chains. Zooplankton and other micro-edibles get driven by the waves. Baitfish follow, and are also held somewhat captive by the surging water. Walleyes come tumbling after. Or rather, slinging around to impart dental-destruction on fleshy minnows.

Rock, gravel and or vegetation are always preferred over flat desert, sandy bottoms. 8- to 16-feet of water is my is my go-to, starting range, slipping deeper as warranted. There is one caveat to that, however. If the wind is really howling, waves cresting, and clouds thicker than thieves, I’ll explore waters shallower than 8-feet.

Something I’ve been doing to find structure without barging right over it, scattering walleyes, is running Humminbird’s Side Imaging. Structure located, and marked with a GPS icon, I can troll alongside it, rod out, without busting up the spot with prop turbulence. Side Imaging also reveals inside turns so I can alter my next pass to cover the feature.

To build that confidence, it’s prerequisite to operate with the proper tools, and that begins with the reel. No deliberating, I’m strapping a Daiwa Accudepth 17 reel to a trolling-friendly rod. The reel was actually engineered for trolling walleyes – not a repurposed saltwater dragging device. Being able to measure out line, with utter accuracy, is crucial to control – and ultimately staring down cranktimidation.

There are a number of trolling-specific rods to choose from. Lately, a number or my buddies, including Brian “Bro” Brosdahl, have been bragging about their St. Croix Eyecons. There are six models – various lengths and actions – crafted explicitly for trolling, from a five footer to a pole vault length 12-foot rod.

My choice in fishing line is pretty straightforward as well. Everything’s spooled with Sufix 832 superline in 10-lb, 4-lb diameter. So sensitive you can feel a fish fart, not to mention the deadness of a crankbait when it fouls with debris. Before welcoming the crankbait, I tie in 6-foot span of 10-lb. Sufix fluorocarbon, connecting the lines with an InvisaSwivel. The clear leader line gives me the confidence that fish won’t get turned off by the colored main line. Also, the fluorocarbon acts a shock absorber. The InvisaSwivel eliminates line twist and keeps the crankbait running like a champ.

Here’s where you get out the notebook. Eons of hours spent trolling for walleyes has built a faultless mental library of lures to line to depth. Picking a series of crankbaits is child’s play. Rapala Shad Raps do it all. Mix the right size and pattern with an established depth-range and you’re taking candy from babies.

I’ll cut to the chase. If the walleyes are working in 8- to 10-feet of water, it’s a shallow-running #7 Shallow Shad Rap – one with the bent bill. Let out 80- to 100-feet of Sufix 832 and let the games begin. Go ahead and mess around with colors. But for me, it’s Bleeding Blue Shad, straight blue/silver, or Firetiger.

Little deeper, say 10- to 12-feet of water? I’m pulling a #5 Shad Rap – the classic elongated lip – with 80- to 90-feet behind the boat. Same colors apply, but here’s where I make the switch to Glass Shad Raps. Their foil skin echoes the aquatic surroundings, making them spot-on realistic at all depths. Additionally, the concave lip on Glass Shad Rap keeps it running straw-straight at trolling speeds over 2.5 mph.

We’ve only scratched the surface. There are as many crankbait techniques for walleyes as there are bass, but you need to get over the hump. Leave the jigs and minnows on shore for a trip or two. You’ll see.