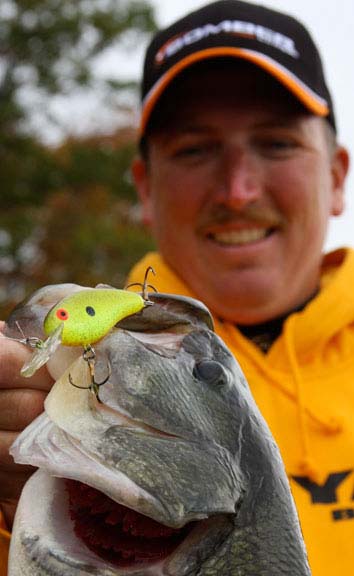 May Means Crankbaits On The Tennessee River Chain Basketball fans have their “March Madness,” but there’s madness in May, too, on the storied reservoirs of the Tennessee River. It’s time for Crankbait Madness.

“By mid-May, bass are done spawning and they come out from the shallows and gang up on offshore structure to recuperate,” notes Jimmy Mason, Bassmaster pro who also guides throughout the Tennessee River system. “And a crankbait is a dynamite tool to locate and catch them. Get a school fired up, and you can catch them cast after cast!”

“In May bass start schooling in the creeks,” echoes Horton. “I like to find them with a crankbait as they start coming out toward the main lake.”

Though largemouth bass predominate on the river system, the Tennessee River impoundments along the Mississippi, Tennessee and Alabama borders also produce some of the largest smallmouth bass found anywhere. Pickwick is the most well known and Horton cut his teeth there. He said that at times both species can be caught using crankbaits on the Tennessee River from the same areas.

“They will be together at times, “ says Horton, “but in May the smallmouth will already be on main lake current breaks. They spawn on main river bars and are already set up on main lake current breaks while largemouth are still migrating out from their protected spawning bays. It’s late May or early June before they get back together and can be caught using crankbaits on the Tennessee River.”

The key to May crankin’ is to track post-spawn bass on their reverse migration from spawning areas to the main river channel, the primary summer sanctuary on all the Tennessee River impoundments. Mason and Horton intercept retreating bass on cover and primary structural elements like points and humps along that migration route.

Mason draws a map line between spawning areas and the river channel and looks for holding structure along the way. Holding areas off the shallows are generally within eight to 12 foot depths, but he is also looking for structure in the 15- to 18-foot range.

The wild card in this crankbaits on the Tennessee River chain poker game is the shad spawn.

“Post-spawn bass fishing is all about the shad,” says Horton.

He looks for areas with rough, rocky or shell bottoms. Shad eat algae off the rocks and shells, and spawn on shallow bars nearby. Most of the shad spawning activity occurs at night or during the wee hours of the morning.

“This is the time of year when you want to be out at daybreak,” Mason said. “When your crankbaits on the Tennessee River are bringing clouds of shad in with them, you know you are going to get slammed!”

Horton comes to the shad feast with the Bomber Switchback Shad #6 or Fat Free Shad BD6 and moves to the bigger, deeper-running #7 Switchback or BD7F Fat Free Shad as the fish move deeper and more to the main lake. The Square Lip Fat Free Shads come into play if there’s wood cover involved. During the prime early morning hours when he’s covering a lot of water and catching active fish he throws a lipless crankbait.

“In May on Guntersville and Chickamauga the fish are moving throughout the day. You’ll find them shallow early, but once the sun comes up they’ll settle deeper. They’re just following the shad. I throw an Xr50 to locate the fish,” Horton said.

“Immediately after the bass spawn, you have the shad spawn period, and bass gorge themselves on the spawning shad,” says Mason. “On Guntersville, they key on the grass edges. On Pickwick, they are on grass edges and gravel bars. During that period when throwing crankbaits on the Tennessee River it’s a squarebill crankbait a lot. I use the XCalibur XCS 100 and XCS 200, and if they’re deeper I go to the square bill Fat Free Shads.”

“Those colors cover 95 percent of my cranking in May,” says Mason.