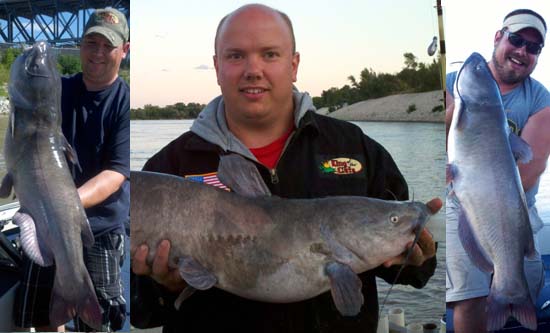 Ask any fisherman if he has a dream location to fish at and most likely he or she will respond quickly with a few choice spots. For example the walleye guys will probably say Lake Erie, or Lake Winnipeg, or maybe Green Bay. The Musky guys will say Lake of the Woods, or Lake St Claire, or Eagle Lake. The Bass folks will probably list a few southern lakes or locations in the BWCA. Ask the same question of a Catfisherman and most likely you will get them to list the Red River in Manitoba as THE dream trip location. What do all these places all have in common? Big fish…and LOTS of them!

The Red River flows North between North Dakota and MN and into Canada before spilling into Lake Winnipeg. Plenty of huge fish can be caught in the States from Grand Forks to the US border, but wet a line in the Canadian stretch between the St. Andrews Dam near Lockport, downstream to Lake Winnipeg and you have a very good chance at catching a Channel catfish or Canadian catfish  in the 30lb range. Yes, that is three zero, 30! For those not familiar with Channel Catfish, that’s about 3 times the size as a trophy fish in most places. I know plenty of people who have cat fished quite a bit and still trying to break the 10lb barrier. On the contrary, up on the Red River it is hard to catch one that is smaller than 10lbs. That stretch I referred too could quite possibly be the best stretch of catfish river in the entire world and for those of us here in the Upper Midwest, it’s a pretty easy drive.

I’ve had the pleasure of making this pilgrimage a couple of times now and I can honestly say that words cannot describe the feelings I had about catching trophy after trophy after trophy of my favorite species of fish. The only thing I can think of that comes close is a young child coming down the stairs to a pile of presents under the tree at Christmas…just pure, simple joy. The best part is that the fishing is about as easy as it gets. A simple anchored boat with a bottom rig, and wait for them to find it.

You can catch these fish most any time of the year during open water, but June and August seem to be the 2 most popular months. June is special for the prespawn bite, and August is good as the fish start to put on a heavy feedbag for the winter. Because of the sometimes volatile water levels in the spring, our group has chosen to hit the August bite instead. From what I hear though, if you hit the June bite right, you can have 100-200 fish days and go home with both arms in a sling. That doesn’t sound like much fun does it?

As far as tactics and locations. We prefer to use 7ft med/heavy to heavy rods. The same rods we use for big Flathead Catfish back home. Especially in heavy current, you DO NOT want to be undersized. Paired with that is 60 series spinning rod or 6000 or 7000 series baitcaster. Matched with that is a simple bottom rig with a 5 or 6/0 circle hook and a heavy bank sinker to match the current. The last trip up there we were using 4 and 5oz sinkers to hold. For line, 20-30lb mono or 50-65lb braid works great. There are all kinds of favorite bait options. Everything from Goldeye, Tulibee, Shrimp, Suckers and Chicken liver are used, but when we go up in August, our favorite BY FAR are Leapord Frogs. For whatever reason, they seem to go wild for them. At one point on our last trip we were running low and we ended up cutting them into tiny pieces and it didn’t even matter, they would just keeping eating whatever size we threw. As long as it was a frog, it caught a fish. We would throw out a piece of other cutbait for a while and wouldn’t even get a bite. Put a frog back on and WHAMO.

A popular location is right below the St Andrews dam, and for a good reason, it puts out huge numbers of big fish every year. It’s easy accessible and basically a no brainer. Drive up to the dam, put out an anchor and wait. Being a little different, we like to hit other spots down river though as it is a bit more peaceful. You don’t have the loud sound of the dam spilling over and also not much turbulence to deal with. The best part is that some great out of the way spots can be found and you might not see another boat all night long. It doesn’t get much better than that. Speaking of night, fishing after the sun goes down has been very good for us and I highly recommend fishing after dark, especially in the late summer. Spots to look for are outside bends, holes, eddys, and really anything that might break up the current to hold some baitfish. Find the bait and you will most likely find the fish. Or, just randomly throw a bait out into the middle of the channel, even that worked for us. Once you get the hang of it, you can start trying new and fun things like tossing out a slip bobber. Now THAT is fun!

This area is no secret and it gets plenty of attention from fisherman around the world, but with the restrictions that Manitoba has in place, you can be assured that these huge fish will be around for a very long time. Speaking of those restrictions, there are a few important things to keep in mind if you decide to make the trip. You will obviously need your passport to cross back and forth over the US/Canadian border, you need to use barbless hooks in Manitoba (just pinch them), no alcohol is allowed in the boat, and there is a strict slot and bag limit for catfish if you plan on keeping any. Also be sure to check the current border regs for importing any of your baits you want to bring with you. Bait is very important and can be a little tough to find up there. Be sure to make bait one of your top priorities.

Another thing to keep in mind is that there are not many lodging options or boat launches up there. Be sure to do your homework before heading up and remember just because a place might say they cater to catfisherman or has Cats in its name doesn’t necessarily mean it is your best option. But trust that no matter where you lay your head at night know that you are in one of the world’s greatest cat fisheries, and do the best to make the most of every minute that you can! Who knows when you might get a chance to do it again?
The Red River used to be the place I only dreamed about going to, now it seems like I only dream about going back.
Good luck!