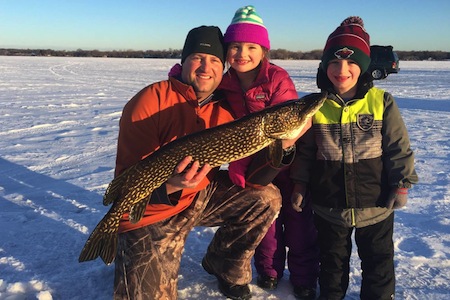 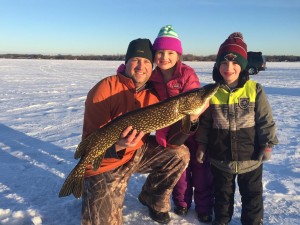 Youth anglers across the country are competing in a youth ice fishing season this winter and, with a little less than three weeks left in the 2015 AAL Youth Ice Fishing Season, the young ice anglers that are getting on the ice consistently are putting some serious fish through the ice.  The midwestern states like Wisconsin and Minnesota have experienced little snow and mild temps, which have helped make it easier to get out on the ice.  Anglers in the western and eastern states have had a more challenging time due to ice conditions and lots of SNOW!

Tucker R., Logan K, Elijah J. and Tanya H. were on fire this past week, putting up some of the highest point totals for the season in a a couple days of ice fishing.  Elijah has reported in that his secret has been downsizing to catch northern pike while he is panfishing!  The predators are eating his small jigs and are cruising where he is catching sunfish and crappies.  Tanya caught her first northern on a tip up this past week along with a bunch of sunnies and crappies while fishing with her uncles.

Baseball has Little League, Hockey has USA Hockey, Soccer has the US Youth Soccer Association, and now fishing has the American Angler Leagues.  Prior to last year, fishing has been without an organization that supported and helped communities build youth fishing associations similar to other sports.

The American Angler Leagues introduce fishing to children in a structured environment similar to youth sports:  “We believe that in order for children to become lifelong anglers, they need continuous opportunities to fish while they are young.  They also need someone to teach them how to fish and then take them fishing,” states founder, Kolt Ringer. The model relies on encouraging experienced anglers to recruit and fish with non-experienced angling families.

You can learn more by visiting www.littleleaguefishing.com.