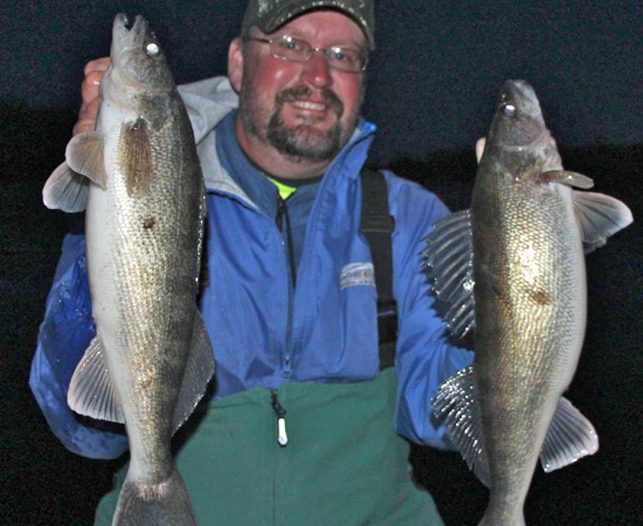 What surprises astute walleye ice fishing anglers on most fisheries is that there are a percentage of fish that remain close to shore at first ice. Why?

Walleyes on the Rim
By Jason Mitchell

Each early ice season is almost a space race in regard to reaching spots further out on fishable ice while still being safe. Simply put, there are just spots that we know will be good and usually, the first people on those spots are going to catch some really nice fish. This phenomena happens on Lake of the Woods, Mille Lacs, Devils Lake and several other major walleye fisheries. The spot we can hardly get to always seems to pull at anglers’ curiosity the hardest. What surprises many anglers however is on just about every fishery, there is a percentage of fish that remain fairly close to shore and typically shallow at first ice.

You don’t always have to be the first angler ice fishing the Boot on Mille Lacs or Knight Island on Lake of the Woods to experience great walleye ice fishing early in the season. Granted, like any locations the bite diminishes drastically as pressure builds so half of walleye angling is just thinking of locations that might have fish and haven’t had all the activity yet. GPS Chips sure have made that a lot more difficult. You see the trouble with the Chips is that everybody else has them to!

Back in the day, not everybody knew how to reach or find all of these offshore locations that load up with fish. Everybody relied on shoreline structure because they could reach the spot and eyeball enough landmarks to find it again. Back in the day, the people that knew about the offshore stuff and were able to find it had gold mines all to themselves. Now flash forward a few years. There are just not that many secrets, most of the spots are mapped and can be bought by anybody. The result has been a huge shift towards offshore structure. Guess what has happened now? There are some really good shallow patterns for walleye ice fishing that are sometimes more dependable than the classic and renown offshore patterns because of the pressure aspect.

If there is a trend that we are seeing on the really big lakes, it has been that some of the steadiest opportunities for big walleyes have been coming along the shallow rim of the shoreline. For the most part, the shallow water connected to the shoreline is a morning and evening bite on many lakes but not always. What these locations are however as everybody races offshore is overlooked.

Finding locations that are overlooked is often the key. I have often stressed that the best fishing happens to the person who finds the fish. What can make walleye ice fishing “inshore” intimidating can be just the amount of shoreline to cover. Large shallow flats or gently tapering shorelines just don’t have the obvious spot that screams at you to drill a hole. Much different ball game than zooming in on a classic mud hump or reef and picking it apart with less than a dozen well aimed holes. Here is the other beauty of shallow water, the variations are subtle yet important and often don’t yet show up on chips. There are still some really great secrets in shallow water.

Any outside point or inside turn with any kind of rock is a classic walleye ice fishing magnet on just about any lake. These locations get a lot of attention especially at first ice. Many anglers will work these classic gravel or rock locations between ten and twenty feet of water. An adjustment that is difficult for some anglers to do and is worth a try is to slide even shallower and closer to shore especially if fishing pressure cools the spot off. People often automatically assume that the fish pull out deeper and progress offshore but you will be surprised how often fish do the exact opposite. The downfall can be that the fish move or are active for very short windows but we have stuck a lot of big fish way up inside on this pattern on several large, predominant walleye ice fishing fisheries.

Other classic shallow water goldmines for big lakes are any sand bars or sand flats that have a nice sharp lip or break on them that plunges down into deep water. Large flats especially if there is some weed growth can hold a staggering amount of fish but little dips, depressions or troughs within the flats are often the sweet spots for walleye ice fishing.

This article isn’t necessary to convince you to fish shallow or inshore but rather contemplate options that aren’t getting pressure. There are times when I have wasted a lot of time trying to find different fish or patterns and finally admitted that I would have been better off fishing right in the pack. There are other times where you can pounce on a location first or figure out some little detail that will keep you successful as more anglers gather around.

We have some really great offshore memories but what we are seeing is that as more anglers use and understand GPS with map chips, the inshore walleye ice fishing locations get touched less and less and over time, the tide starts to go the other way. We are starting to have massive locations to ourselves, we are often finding large schools and aggressive fish that have seen no pressure and we are finding big fish. What is ironic is that this will happen for a while and then more people will be on to these patterns and over time, these locations won’t be as productive because there will be more people doing it.

What we will be looking for than is some other under the radar pattern where we can find fish that have been avoiding pressure. Fifteen years ago, the go to move was finding structure off shore for untouched fish and big fish. Now if I were to put my money down, I would lay it on the shoreline in water shallower than what most anglers’ feel comfortable ice fishing for walleyes.

More and more in the future, the current trends and attitudes of fellow anglers will often have as much influence on strategy as the fish themselves. In other words, you won’t just be able to think like a walleye, you also have to factor in pressure. The trump card is a lack of pressure. Fish that haven’t been worked over make you look good. The fish compete against each other and larger schools get competitive and aggressive by default. When the fish get beat up a little bit, that competitive nature drops dramatically.

Caption for Photo: The author Jason Mitchell believes that inshore opportunities are some of the best kept secrets for big walleye ice fishing on many large natural lakes right now.