Some say that technology is ruining our experience on the water. Others might just say the opposite is true. Either way this is a losing battle between the two groups. Everyone is entitled to their opinion; however that doesn’t mean you have to listen to it.

Some would say that I am on the side of the fence that is in favor of technology and I would have to agree. Being a firm believer that the addition of several electronic gadgets to my fishing arsenal has dramatically improved my ability to find and catch fish.

The advancements in Sonar technology have made life on the water that much more enjoyable. I am able to use my side and down imaging sonar to see things in the water that may have never been seen with older sonar units. Hidden little gems like rock piles, grass beds, or submerged trees.

Even the 2d sonar technology has advanced to the point that a standard dual beam transducer can help you locate pods of baitfish, bottom consistency and even fish holding tight to structure. This combined with the use of the Side Imaging can be a deadly way to attack a body of water.

Now throw in the added technology of a built-in GPS unit and you are a triple threat. The mapping technology of the gps units allows you to find areas that are likely to hold fish as well as eliminate water that you would not want to be fishing. They also allow the angler to prepare off the water in advance.   The addition of mapping software to your smartphones or tablets allows you to sit in your recliner and search a lake from the comfort of your home.

Unfair? In my eyes I would have to say no. These added tools allow me to be more productive on and off the water and keep me fishing much longer. More time is spent with my presentations in the water rather than burning gas looking for spots to fish.

Let’s now add in the newest electric bow mount motor technology like the MinnKota I-pilot Link system and I can now Ethernet link my electronics to my motor to follow contour lines that are pulled directly from the GPS system. This technology keeps my boat in position much easier thus allowing me to put my baits in the precise strike zone of the fish. This adds up to more and often bigger fish in my livewell. This is huge when fishing a tournament and can certainly mean the difference between coming home beaten or coming home with a check to cash.

Every year there are leaps and bounds made in the world of technology and if you blink you just might have something pass you by. These advancements are not always a “must have”, however with new advances comes new ways of looking at the way we fish.

Over the last few seasons my way of trolling for salmon and trout on Lake Michigan has been greatly changed by technology. With the addition of a speed and temperature probe to the boat I am no able to see what is going on down deep in the water column. With a simple probe that attaches to my downrigger cable I can now know just how fast my baits are moving and what the water temperature changes are presentations are being lowered down. Again, the argument could be made that this is an unfair advantage, however, I don’t agree. This is just another tool in my fishing tool box to help me become a better angler.   If you just use this equipment blindly and not learn anything from it then you will certainly not benefit from the use. Every time on the water I learn something new and most of the time it is due to the added gizmos and gadgets that are being employed in my fishing endeavor.

Shore fishing has also been a huge change for me. I have even been able to increase my ability to find and locate fish when on shore. The advancement of the smart phone has allowed me to not only look at lake maps right there on my phone, but also to even have a sonar reading right there attached to my arm.

My abilities were limited as there was no way of knowing just what might be in the water in front of me. A boat wasn’t being used to cover the area with sonar readings to tell me what the depth changes are or where there may be structure. This has been changed by a few companies that offer castable sonar units. This year Vexilar has taken advantage of the smart phone technology and introduced a high tech sonar gadget to add to your phone.

The Sonarphone, as it’s called, is an advancement in my technology arsenal that that will allow me to cast a probe out from shore and get real-time sonar readings of the depth and the structure of the area right on my phone. This technology will allow me to fish new areas and allow me to know what type of water depth I might be fishing so as not to waste my time on areas that I might not want to fish otherwise. 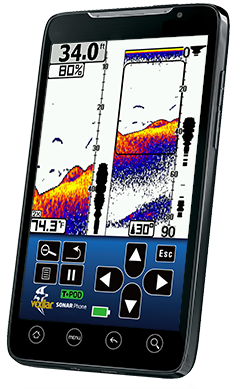 From Smart phones, to Ethernet linked GPS/Sonar units and even down to small servo controls that can control your trolling speed with the turn of a dial, advancements in technology have changed the face of fishing. It certainly isn’t your cane pole and can of worms type of fishing anymore.

I don’t have anything against the old way of doing things, but to tell you the truth given all the ways I am able to attack the water now in search of fish there is no way that I would go back to the way it used to be. The proof is in photos, and there is a hard drive at home that is full of proof of why technology will always be a huge part of my fishing.

Agree or disagree, that is the question?