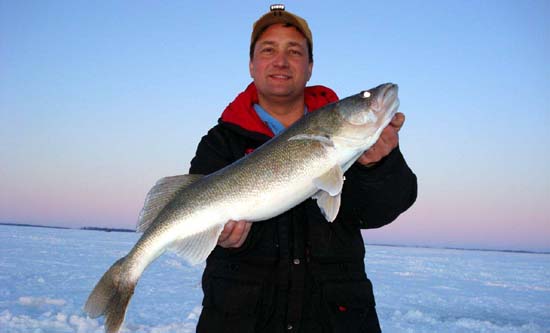 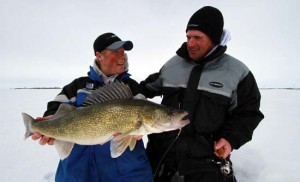 It Isn’t Always What You Think!

Ventured onto the ice yesterday at the mouth of a bay on a large lake with the underwater camera. What an eye opener!

For years we’ve heard how fish such as northerns chase away smaller panfish and even walleyes. And more amazing stuff yet! Well, I’m learning to keep a more open mind after this experience . . .

I began viewing individual members of a loose school of walleyes at about 3pm, fish in the 3 to 5lb range. Finally, I enticed an average walleye to eat my nils master baby jiggershad and immediately more walleyes began moving in (to check out the commotion?). Within the next half hour I’d estimate that there were 15 to 20 walleyes poking around in about a 30 foot radius. Using my underwater camera I saw two northerns together also, one about 2lbs and the other close to 10.

By dusk I had a flurry of crappie activity that lasted for about 15 minutes before the school moved off. 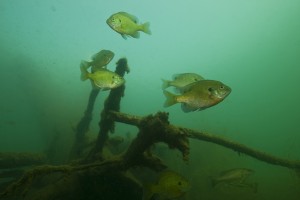 But at one point just at dusk I had mixed batches of sunfish, perch, walleye, crappie and pike all co-mingling in the same area (seen on my underwater camera).

Though none seemed to really be pursuing food except maybe the crappies, which I caught eight of. I ended up with three really dandy walleyes, too, which were released.

But a couple questions and observations. Does catching a fish in an area attract others, and why? I know smallmouths follow hooked fish, so why not walleyes?

How can we utilize this knowledge to increase our catch? I’ll bet most of you can think of many ways– especially with the precision of icefishing.

Finally, because of my underwater camera I now see that indeed, different fish species interact and don’t chase each other away from areas in all cases. (several times i saw a northern virtually brush up against a walleye).

This is first in what I hope to be many more “eye openers” for all of us this year. Let’s share them in the *forum* (Link in menu above).
Article by Cory Schmidt