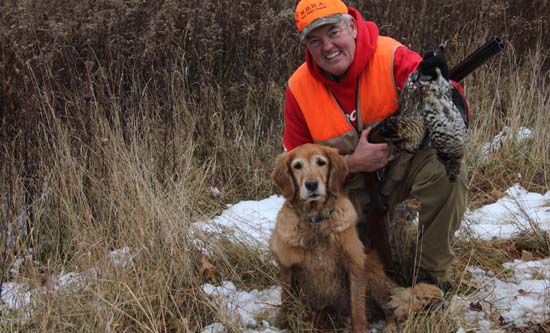 Grouse hunting is more than flushing birds and burning powder. It’s also getting out on cool crisp morning with the dog and going for a nice long walk while taking it all in. The changing colors, the wildlife, watching the dog work, it’s all good. That said you still have to put a few in the air to make it fun and it’s looking like that might be more of a challenge this season.

Last year’s flush rates where off considerably over the previous season which was pretty darn good. Although grouse had supposedly hit the downside slide of their ten year cycle there were plenty of birds in 2010 and was a really nice surprise. On the other hand we never did hit the big bonanza that comes with the top end of the cycle and was probably due to bad weather during the all-important nesting season for a number of years in a row. Just when you thought it could get good we went backwards. The good news was the fact that decent hunting lasted a year to two longer than was predicted. 2011 was more like what was expected and hunters definitely had to work harder and spend less time squeezing the trigger. Time will tell but it’s looking like the numbers are going to fall off again. Even so; there will still be pockets with decent numbers of birds to push. It’s just that it might take some extra effort to find them.

In the heart of the grouse belt of northern Minnesota the drop in flush counts have been most dramatic. That part of the country also had the most birds to lose and the fall off appeared more severe. I’ve seen if before, flushes of twenty of forty birds followed by years with days without bumping a single bird. By moving a little further south though I was able to keep putting birds in the air in enough numbers to keep my and Annabelle interested. Not nearly as many as when working the Northome to Arrowhead regions during primetime, but enough to make it fun. “Fun” the last couple years in the southern grouse range was six to maybe eight flushes in a four hour walk. That’s not fabulous but it’s not bad either. In years past that move to the southern end of the belt has kept me heading back to woods for five or six more years, long after the previous peak has come and gone. The key is to keep trying new areas in different parts of the grouse range until you start finding birds and not give up. They’re there; you just have to give it some extra effort.

New growth has always meant prime grouse habitat but in the down years the older growth can mean more birds. Look for old growth that butts up against lower lying swamps and then work the edges. Points that jut out into an alder swamp or at the end of a ridge that drops off into the lowland can be real hotspots and is a good time to be on your toes. When you find a spot like that you start to get the feeling that you’re going to bust a bird any second and you don’t want to miss out. Of course the dog can give you a good idea if you’re getting close. My Annabelle’s pace picks up and her tail starts corkscrewing and I just know that things are about to hit the fan. I also know that if she’s been getting birdy but hasn’t put any in the air yet they could be running ahead. That’s when I really expect something to happen when getting to those previously mentioned points, or maybe an edge or trail through the woods, or any change in the cover that the birds have been moving through.

A fresh cutting through a stand of old growth can create the same kind of opportunity, especially after it’s had a couple years for the underbrush to develop. The heavier brush helps to conceal and prevent airborne predators from wreaking havoc on a bird that was made for human consumption, especially this human.

The owls, hawks, and eagles can all eat grass.

On a side note the retrieving breeds like my Annabelle are prone to ear infections and I’ve found a 100% natural product from Apple Blossom Naturals to be super effective and has saved me trips to the vet’s. You can treat an infection or use it as prevention, especially if you’re best friend is working her tail off getting in and out of swamps and lakes. It’s called ABN EAR CURE and is easy to use and you can find it at appleblossomnaturals.com. See you in the woods.