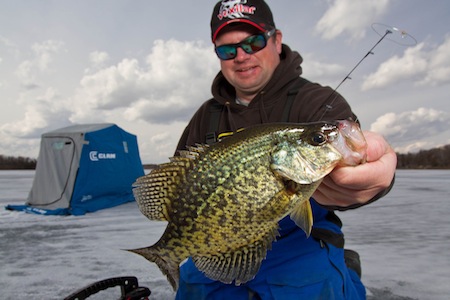 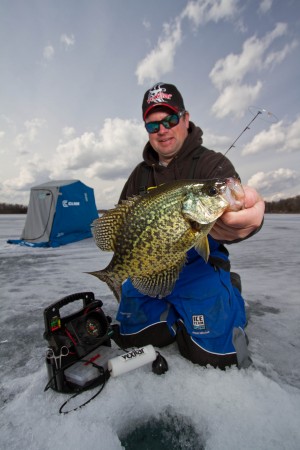 The reality of lure presentation in ice fishing is that conditions are changing from day to day, and especially from year to year, and your methods will need to adapt to reflect this.  The biggest mistake I have ever made as an angler is getting so confident in a particular presentation, mentality or location that I quit learning.

When you encounter lakes that are in a forage slump, a live bait lure often reigns as king, and the reasons become more obvious when you watch these fish with an underwater camera, like the Vexilar Scout.  What you see when using a camera while fishing for fish that have too much to eat around them, are that these fish are not as motivated.  Typically when you watch a panfish hit a lure or jig, they peddle up to the offering and suck the jig in.  Usually, the fish only suck enough to get the jig about half way in.  The second effort is when the entire jig disappears.  Sight fishermen can relate to this.  When fish are more motivated, these suck ins are more powerful and happen closer together.  That is why on a better bite, soft plastics work so well.  On tough bites, you sometimes don’t get the second effort and the first effort is often lacking effort.

One of the most common situations where I often see traditional live bait trumping soft plastics, are on fisheries with out of balance forage.  Fisheries with high amounts of forage and lower densities of fish.  Some perch fisheries, for example, have huge numbers of freshwater shrimp.  The fish grow big and are in great body condition.  Because of the endless forage that is present, getting these fish to bite can seem like brain surgery.  On the prairie lakes of the Dakotas, we often see this cycle.  Typically when the water rises, the fish get less concentrated and the decomposing flooded terrestrial vegetation spikes invertebrates through the roof.  Lots of stuff to eat for the fish, but not necessarily the best situation for finding fish that make you look good.  What is interesting is how some of these lakes can cycle.  A particular lake might get a reputation for a winter or two as a tough lake for fishing.  You work hard to catch a few fish and you mark many fish that won’t eat.  Then, a few years go by, and the lake level either stabilizes or drops.  Once the fish crop down the edibles to a certain point, they miraculously begin biting good.  Many lakes go through these highs and lows where fish bite really well one winter and require pulling teeth the next.

Imagine a ten inch bluegill or twelve inch perch in an environment where there is little competition amongst other fish for the available forage and there is a never ending opportunity to eat something that can’t really get away.  The result is a fish that is comparatively lazy, unmotivated and methodical.    There might be windows where these fish will become more aggressive for short periods of time.  Much of the time however, these fish can be very temperamental.  They often have an extremely short ceiling where they will rise up through the water column to chase.  These fish also often back down from any aggressive movements.  These bites often call for a more stationary presentation where the rod is gently quivered or bounced subtly before hanging still.

This highlights a common mistake some anglers make: thinking the world below the ice is static.  The mistaken belief that nothing changes.  We have all probably been lulled into a great bite where we set up on a location and the fish basically make us look good.  The fish accelerate towards your presentation, rise up and than greet you.  The reality is that you can use several different presentations and fish those presentations several different ways and get bit.  We go home with a bounce in our step and a grin.  We also go home with confidence.

With panfish, the biggest trend over the past few years might be how anglers have embraced soft plastics.  There is much to like about soft plastics.  You can change colors and descent rate easily.  The plastics move water and vibrate in a fashion where they can pull aggressive fish from great distances.  You can catch several fish on one tail eliminating time spent out of the water reloading bait.  Often, it seems like a quivering or gliding soft plastic will trigger more aggressive strikes from crappie, bluegill and perch.  On many bodies of water, I start out with plastics and don’t take them off all day.  We have filmed countless shows using soft plastics and have written several articles explaining the merits of soft plastic.  Once you arrive to the conclusion however that you ‘never’ have to rely on live bait you are heading towards trouble sooner or later.  The reality is that the tougher bites still force my hand and require tipping with traditional live bait options like minnow heads, Euro Larvae, wax worms or wigglers.  The best anglers are flexible and have a fluid mindset that allows them to adapt.

A deadly tip for really tough fish that just come up to the bait unmotivated and only give the bait one light suck in and don’t want to hold onto the bait is to use a dangler.  A dangler is a tiny treble hook that gets slid onto the hook of the jig so that it dangles behind the bait.  I really like to use danglers with wax worms.  Wax worms ooze out a lot of scent and taste.  Thread on a wax worm on to the jig hook.  Slide the small treble hook on to the jig hook so that it dangles behind the wax worm and than thread on another wax worm over the top.  When fish grab at the back of the jig and mouth the wax worms with little effort, the treble hook gets caught on the mouth of the fish.  This little trick will help your batting average and allow you to detect really tough fish and has saved my tail many days when I have had to pull my hair out trying to catch tough fish.

On bites where you have to let the jig hang still or tough bites where distinguishing the bite takes concentration, traditional live bait can trump soft plastic options.  Besides using danglers, another trick that can surprisingly help you catch more fish in these situations is to adjust the angle that the jig is hanging.  Many ice anglers preach using a palomer knot for horizontal jigs.  Most horizontal jigs do indeed fish much better if they are truly hanging perfectly horizontal.  What happens on a really tough bite however is that the fish often hit the wrong end of the jig and don’t have enough force as they move water to turn the hook end of the jig towards the mouth.  As a result, the fish nip on the wrong end.  A way to counter this situation is to adjust the angle that the jig hangs at, so that it hangs more hook down.  Adjust the knot so that the hook hangs slightly lower than the head.  As fish approach the jig, they typically rise up and they have a habit of hitting the closest end of the jig, typically the hook end if the jig is cocked that direction.  Cocking the head up and hook down slightly can help your batting average on tough bites where you have to practically dead stick as the fish approach.

The reality is that live bait still taste better than any soft plastic.  I have an aquarium in my office that has perch, bluegill and crappie.  I can drop a minnow or wax worm in the aquarium and the fish eat it.  If I drop a soft plastic tail into the aquarium, the fish will still hit it and suck it in, but they always spit it out.  No fish in my aquarium has ever swallowed or digested a piece of soft plastic.  On the toughest bites where fish appear extremely unmotivated, live bait gives you an edge because the scent will still pull fish over when you have to hold the presentation still and the fish will hold on to the presentation just enough longer to both distinguish the bite and set the hook.

Don’t get locked into one lure presentation so hard that you beat a dead horse.  When people make comments in fishing like “always” or “never,” I know they are confident, but not as seasoned.  If you fish enough, you will come to the conclusion that fish don’t ‘always’ bite on Lake X, or a particular lure ‘always’ works.  Perhaps a particular location ‘never’ holds fish.  When you start believing yourself and get rigid, you are heading towards humility.

Confidence must be seasoned, or you are going to get into trouble as an angler.  You have to believe and have confidence in order to mentally succeed on the ice.  You have to believe that you are going to find fish and then figure out how to catch them.  The trouble arises when we have over-confidence in a spot or presentation because of one great moment, and we make the mistake that when we go back to ‘Lake X’, everything will be the exact same as when we left.  I am willing to bet that if you fish a lot, you have made that mistake; I know I have.

These little tricks can help you catch a lot more fish when the bite gets really tough.  Fish that won’t speed up towards you or won’t rise in the water column are usually tough fish to catch but with a few tricks and the right strategy, you can still scratch together a good day on the ice.
by Jason Mitchell