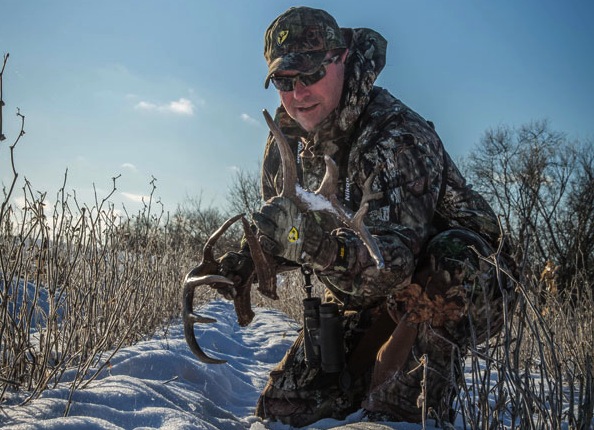 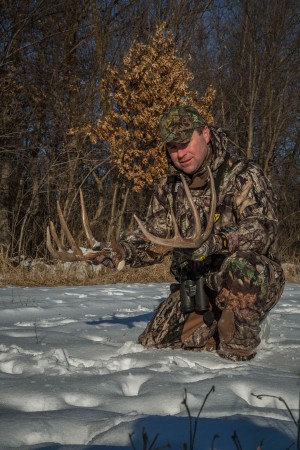 There’s not a lot better to beat cabin fever than spring shed hunting! Lately with the winters we’ve been having, the spring shed season seems like late winter. Either way, here’s our guide to finding shed antlers and getting a jump on next season’s scouting.

Like many deer hunting related activities, spring shed hunting doesn’t usually align with the nicest weather of the year. Also throwing a wrench in the works is the fact that finding sheds often requires a lot of walking. That being said, we recommend wearing our ScentBlocker hunting socks. I try to dress as lightly as possible to avoid becoming too hot or sweaty. Our Merino wool baselayers are always in season. With the Merino wicking properties, I stay warm and dry in these baselayers. Also, Merino wool is naturally antimicrobial, so after a long day of walking I don’t smell like dank marsh water.

My favorite time to shed hunt is in March just after the winter snow melts. If it’s not raining my outer layer will Recon pants, a ScentBlocker hoodie, and rubber knee boots. If it is raining, I’ll be protected in my Drencher rain gear. Other people who live in more extreme climates might choose to wear something different. For instance, when Pat Reeve heads north to frigid Canada to shed hunt with Cody Robbins, they’re all wearing our Outfitter gear or new Northern Extreme if it’s a late winter.

No dedicated shed hunter ever leaves home without a backpack. Not only is the pack handy for carrying sheds, it also doubles as a snack pack. In my Spider Monkey backpack I’ll at least bring granola bars, jerky and water, as well as fundamental survival gear that stays in my pack. This includes a lighter, 50 yards of parachute cord, and a reflective mirror.

Once the gear is in place to make the physical part of the shed hunting trip a safe and enjoyable experience, it’s time to think about where to look. 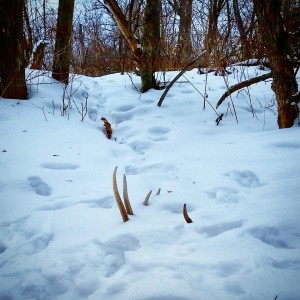 “The first step to finding a lot of antlers is to locate where the deer are feeding during shedding season.” Pat Reeve’s logic makes a lot of sense, yet many overlook it. Each winter lots of well-meaning shed hunters continue their fruitless searches in bedding and feeding areas that were popular during the fall. Unless the preferred winter food source is also the fall hunting area, the chances of the deer still being there are slim. We recommend starting to look right where the deer were feeding. Fresh sign, droppings, and of course trail camera evidence will confirm what the deer were eating. Possible food sources could be grain fields, (harvested or standing) oak flats, hay fields, fruit orchards, etc… Each property will be different.

Often times shed antlers will be near the food sources. Sometimes a buck digging for food under the snow will knock an antler off. Big bucks don’t like the lopsided weight that remaining antler creates and generally, he’ll soon become annoyed with the other antler and purposely knock it off as well.

Some people even create ‘shed traps’ (where legal). They set up a small chunk of hard wire fencing or bungee cords with a few posts in the shape of a ‘V’. At the vertex of the fence, they drop some corn or hay on the ground for the deer to eat. The intent is that the buck will stick his head into the “V” for a bit of food, and bang or press his antler on the resisting lines and hopefully knock or push it loose. PLEASE do us all a favor though, check local rules and regulations about winter deer feeding and creating shed traps. No shed antler is worth breaking the law. 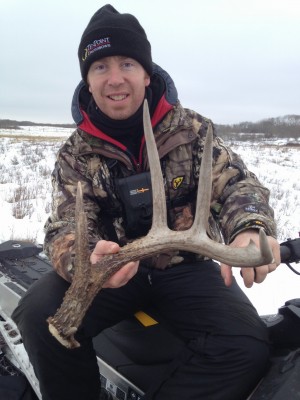 Once the preferred winter food source has been located, the next step is to find where the deer are bedding. By ‘backtracking’ the trails to their recent bedding areas, many sheds can be found along the trail. Often the path to the food isn’t an easy one, with possible fence jumps, creek crossings, or steep hills to maneuver. Whenever the bucks have to jump, duck, or run they might jostle an antler off as well. When looking for sheds on trails, pay particular attention to obstacles that might jar the animals head or bang the antlers on something.

Lastly, we recommend scouring the bedding areas for antlers. Although the trail may be obstructed, most winter bedding areas will not be far from the food. A decent winter bedding area needs to offer enough cover to protect the animals from the weather. In the winter months deer like to use as much of the sun’s warmth as possible. Look for winter beds on south facing slopes as well as in thermal cover such as spruces and cedars. Pat Reeve said it best, “My ideal winter bedding area would be a southern slope with cedars. If you can find that, there will be sheds nearby.

Often the buck will drop an antler while he’s laying down, entering, or exiting the bedding area. Be sure to check all the trails, not just the major ones. Every decent bedding area has a number of escape routes. If a buck is startled and has to use the backdoor to quickly evacuate his bedding area, he may also move just quick enough to knock off an antler.

We all know in deer hunting there are no absolutes. These are just a few areas we recommend to begin the search for shed antlers. We’ve also found them in our yards, on the road, in creeks, on frozen lakes, near barnyards, at corn cribs, compost piles, gardens, and several other places.

Shed hunting is a lot of fun and can be incredibly addictive! It’s also a great way to start scouting for the next season. Take the whole family, and maybe even the dog. Be sure to dress appropriately.