Home/Top Stories/Should I Stay Or Should I Go?

If you’re an ice-fisherman, you’ve almost certainly debated this question: Sit tight and wait for the fish to come to you or pick up and start drilling holes to go to the fish? Staying put may result in a day spent just out of the fish’s range. Go mobile and you might leave just before the fish arrive. 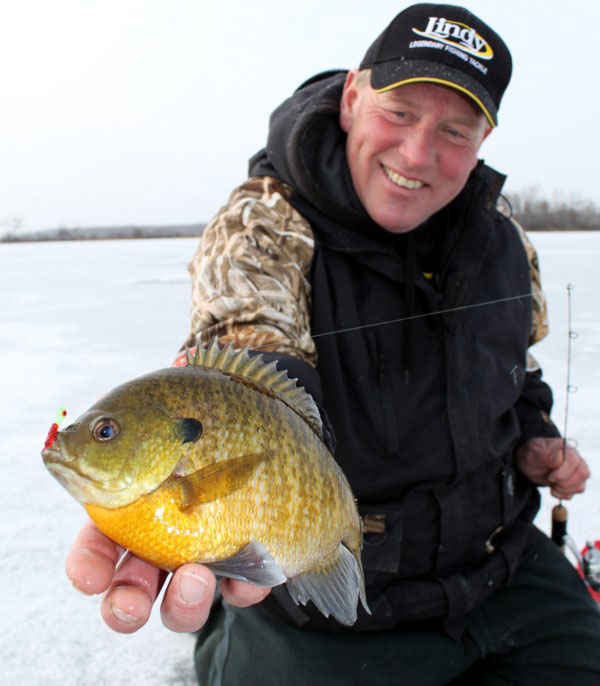 If this indecision is bugging you, here are a couple guys who know a thing about staying or going, and their advice can help you make better fishing decisions on the ice.

Each approach offers advantages and disadvantages, and each situation is different, so there is no set answer that fits every fishing occasion. Lindy pro staffers and ice-fishing experts Jeff Sundin and Jon Thelen spend quite a few days using both approaches, and experience taught them the factors to consider. With that in mind, we asked Sundin about the situations that call for a more stationary approach, and Thelen about the conditions that prompt him to split.

When Sundin expects the fish to be somewhat inactive – often during a cold front or just after a front plows through, he likes to pick a high-percentage spot and stay put, concentrating on coaxing the fish into biting. That’s contradictory to the strategy some anglers employ.

“During periods when fish become less active, an angler’s intuition to try to locate active fish may turn out to be counter-productive,” Sundin said. “At times like these, finesse fishing over a known school of fish may seem slower, but actually results in a greater catch.”

For Sundin, who spends many days on the ice and gathers daily fishing reports from a host of fellow anglers, his approach often means fishing a spot that a school of fish has been using on an insect-rich mud or marl flat. It also can mean setting up on a funnel area such as a channel or trough between reefs or deep points, or over a distinctive structural feature such as a rock bar on a sandy flat or a corner along a reef.

Sundin spends added time studying maps when he plans to employ a stationary approach, and often his starting point is a specific GPS waypoint where fish have been feeding or where something about the bottom contour or make-up suggests that it should be a fish-concentration point.

Once in position, Sundin normally opts for a two-rod approach. He fishes aggressively with one rod, using a Lindy 360 Jig or Rattl’N Flyer Spoon to call fish from around him. Because he normally employs a stationary approach when fish are less apt to be active, Sundin’s second rod typically is rigged either with a slip float for dead sticking or used to work a jig softly.

“Baits like the Frostee Jig, Slick Jig or Foo Flyer can trigger strikes from fish that might be scared away by the more aggressive search baits,” he said.

It’s worth noting that choosing a stationary approach does not mean going “all or nothing” on a single spot. Sundin selects his starting spot carefully and gives the fish time to arrive and to respond to his presentations, but he is not unwilling to move.

“If your educated guess doesn’t pan out and your sonar provides little or no evidence of fish movement in the area, then its time for a move to your next best guess,” he said.

During mid-winter when walleyes and other gamefish spend more time roaming vast main-basin areas than holding on defined structure, Jon Thelen often uses a mobile approach, especially when the weather is mild and somewhat stable. Mild weather lends itself to fishermen working the open ice as opposed to holding tight inside a shelter, and the same conditions tend to make fish more active.

If Thelen is fishing a big mud flat, he’ll begin by drilling a series of holes spaced 20- or 25-yards apart.

“I don’t like to drill a hole every at 10 yards because every hole you drill has the potential to spook fish, and I believe I cover a wider area than that with searching lures.”

Once the holes are drilled, Thelen returns to the first hole to begin fishing. It’s had the most time to settle back to normal. Unlike many mobile anglers who would then graph several holes and not fish until they see fish, Thelen typically gives every hole at least a few minutes, having found there often are fish that are outside the cone of his graph but close enough to the hole that he can call them near with something loud and aggressive like a Lindy Darter, Rattl’N Flyer Spoon or 360 Jig.

“I’ll usually hit my knees beside a hole, even if I don’t see anything initially, and sometimes I’ll draw in a school of fish that I’d have never found if I hadn’t gone ahead and fished that hole,” he said.

Along with using lures and that make noise and vibration, Thelen always pounds the bottom when he’s searching for fish on mud flats. Pounding kicks up mud and suggests a minnow foraging on tiny aquatic insects.

Thelen stays in a spot as long as fish hang around, but if they flee he’ll gladly return to moving from hole to hole.

“Those fish are moving, so if you want to keep catching them, you have to keep moving, too.”

A final practical advantage of the mobile approach is that you can travel light. If it’s warmer than about 20 degrees and without much wind, Thelen carries only his auger and a bucket that contains his graph, three  rigged rods, a couple of boxes of lures, a skimmer, some minnows in a coffee can and a cup of waxworms or other larvae. If it’s colder, he might use a small hand-pulled sled and add a portable shelter to use as a warming house.