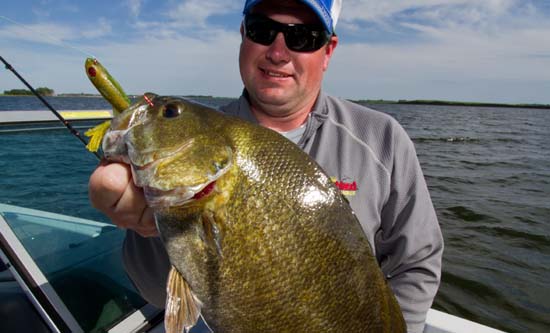 While several major storm cells made their way through Wisconsin this week, the large rain events of the past month have generally lessened. Water bodies are returning to normal levels, but still offering good early summer paddling opportunities. Sand bars are beginning to reappear on the lower Wisconsin River. Hiking, biking and ATV trails also continue to improve, as the drier conditions are allowing crews to mow the abundant grass from all the rain.

The more stable weather in the last week made for increased fishing pressure. Bass fishing continues to improve in the Northwoods. Top-water baits and finesse plastics have been key for smallmouth in particular. Walleye success has been generally good with some very nice catches being made in and around the mid-depth weed beds. Musky action has also continued to be consistent with most anglers seeing several fish per trip. Panfish action has dropped off a bit as most bluegill have completed spawning and the bigger fish have retreated to deeper water. More Wisconsin fishing reports.

Here are north eastern Lake Michigan Wisconsin fishing reports: Perch anglers on Green Bay are beginning to see small schools move in and have landed some moderately sized fish suspended in 14-18 feet of water. Smallmouth bass action on the bay continued to be a bit spotty, but some still reported catching a fair number. Musky anglers on the bay had variable success, while action has picked up for chinook salmon and steelhead. Salmon action has also been improving on the lake side of the Door Peninsula, with anglers out of Baileys Harbor and Rowley’s Bay catching mostly chinook off reefs in 70 to 140 feet of water on spoons and flies. Kewaunee, Algoma and Manitowoc have seen an influx of anglers with boats averaging three to four fish, mostly chinook and steelhead.

South eastern Lake Michigan Wisconsin fishing reports: Anglers out of southern Lake Michigan harbors reported mixed success. Action slowed some out of Sheboygan but remained good at Port Washington for steelhead, chinook salmon and lake trout. Trollers out of Milwaukee have been targeting chinook and coho, but almost half of the catch has been lake trout. Racine and Kenosha trollers continue to catch predominantly coho and lake trout, but a few chinook and rainbow and brown trout have also been caught.

It’s peak bird nesting activity now. The past week has brought many fledglings statewide with reports of orioles, warblers, flycatchers and other long-distance migrants feeding young outside of the nest.

Turkey broods are growing in size and stature with poults now about the size of ruffed grouse. Fawns have begun moving around more with does through the woods and bucks have been spotted with already promising velvet antlers.

Native wildflowers like the compass plant, purple prairie clover, rattlesnake master and milkweed are blooming. Monarch butterflies lay their eggs exclusively on milkweed plants, and when the eggs then hatch the larval caterpillars feed on the plant. Following the wet spring, it looks like a great year for blackberries, with vines laden with unripe fruit. Now is also the time to be on watch for the invasive wild parsnip, whose chemical makeup can cause serious skin irritation when exposed to sunlight.