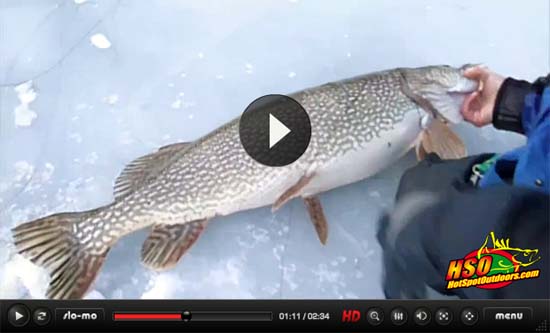 Jake Rodiek caught and released what is almost certainly the state record Northern Pike in the Nebraska Sandhills on January 28, 2014. The size above means his Nebraska state record northern pike would beat the current record by three or four pounds!

What he chose to do with this fish of a lifetime is what matters most – he released it. Preserving the best genetics makes more big fish for all in the future – big fish make big fish just like big people make big people.

It also guarantees that the fish is still out there swimming to be the fish of legends for someone else, and who knows? Maybe Jake will encounter it when it’s a pound bigger one day.

The image shown at the end of the video has been edited to protect the anonymity of the location where the fish was caught. The image of the fish itself and the image of Jake were not edited in any way. For more on being a steward of our waters, visit www.RecycledFish.org./nFor more on the Recycled Fish “On Ice” Tour visit RecycledFish.org/OnIce.