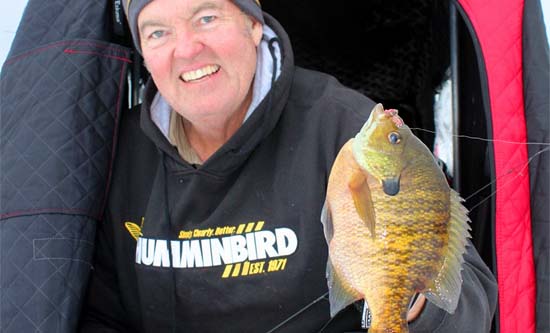 If you plan to be ice fishing walleyes this January this is a must read. January in Minnesota means plenty of ice fishing walleyes and there are many great opportunities available for doing some serious pole bending. Walleye anglers have more options now than at any other time during the hard water season and can be a real mixed bag from the first of the month to the end. Basically; active fish can be found from shallow to deep and are ready and willing to co-operate if you know the where and the when.

Humminbird pros Mark Courts of Harris, MN and Kevin McQuoid of Isle, MN uncovered an explosive shallow water pattern dor ice fishing walleye on huge Mille Lacs Lake that most anglers have never heard of. Mark on the big bang: “We found a shallow bite in five feet of water that was simply incredible. The key was fishing the pencil reeds (hardstem bulrushes) at dark and all night long during the full moon in early January.

The fish started moving up at dark and would just keep coming and we had a ball sticking big walleyes with five feet of line out. We used Northland Live-Forage Spoons ice fishing walleyes because they are nice and light and have an enticing flutter. You could use a heavier spoon but really wasn’t necessary when fishing that shallow.

We’d tip it with a minnow head and drop it to the bottom and then work it up and down and the walleyes would come in and pound it. We also discovered big perch hanging in and around the reeds that could be caught during the day and included a few walleyes as well.

During the day, while ice fishing walleyes we were literally able to see the fish that came in and watch them react to and inhale a bait. The big attraction to the reeds was all kinds of bait hanging around including tons of small perch.”

The downside of fishing that shallow in clear water like Mille Lacs is the spooking factor when ice fishing walleyes and the guys had to be a little sneaky. Mark brought his big wheelhouse up but had to be careful where he parked it; “We found that the big house tended to spook fish off and we were better off using a portable which was a lot less intrusive and didn’t keep the walleyes from getting into harm’s way.

We’d also shut the lights off totally and fished by the moonlight and the light from our Ice55 Humminbird Flashers and only turned the lights on to handle a fish.” Smaller portables are perfect for being comfortable and flying under the walleye radar. A one man shelter that that provides plenty of room for working two holes, a depth finder, and a heater when ice fishing walleyes is a must. It’s light enough and easy enough to move around on foot but big enough to be comfortable in all night and all day long.

Typically after a week of red hot ice action the shallow ice fishing walleye pattern starts to dry up and is when Mark will start moving deeper to smaller offshore rock piles; “I like the smaller rock piles because there usually left alone. It could be that the bigger more popular spots are simply easier to find and the crowds don’t have the tools to find the smaller variety.

With a G.P.S. like my Ice 597ci and a Lakemaster chip I can easily find those smaller overlooked spots and have them all to myself. The 597ci is incredibly easy to use; just pop in the chip and hit the view button until you see the map and the cursor which shows exactly where you are in relation to all of that potential ice fishing walleyes holding structure. I like rocks that top out at about eighteen to nineteen feet and are surrounded by deeper water.

During the day I’ll look along the deep edges of the rocks where they transition to sand and then get back up on top in the evening and after dark. But instead of the lighter flutter spoons I’ll use the heavier ones like the Buckshot Rattle and the Macho Minnow and tip them with a minnow head.

I’ll also use a Puppet Minnow and tie to the back eye so the bait can be worked more straight up and down. Rigged in that manner the bait can be banged into the bottom instead of the usual motion of sweeping out and back in. The banging makes noise which can attract fish and can also create a little dust cloud that can really turn fish on. When ice fishing walleyes it works to attract both walleyes and jumbo perch and is a good method to try if you’re not seeing many fish.”

If there is a prime time for ice fishing walleyes it’s now. Fish are in a lot of different places that should be accessible and are active enough to chase down and hammer a bait. Doesn’t mean it’s always going to be easy but it shouldn’t be that hard. See you on the ice.