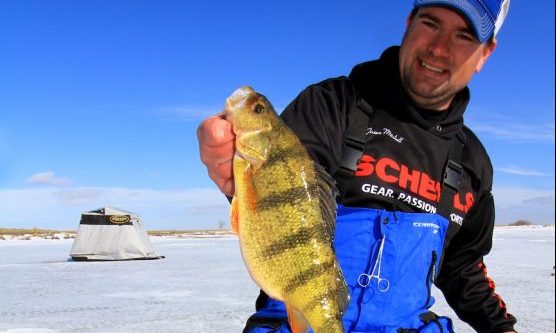 When you go out ice fishing perch there are tactics that can keep fish in an area longer. Especially those Jumbo Perch. Jason Mitchell shows you how it’s done in his own backyard of Devils Lake ND.
by Jason Mitchell

When we look at catching jumbo perch through the ice, I dare say that we typically catch ninety percent of the fish in a ten percent window. Ice fishing perch on most bodies of water consists of drilling holes to get on fish and getting that one or two flurries that fills the pail. You can go from zero to hero in about twenty minutes when you finally strike pay dirt.

The key to putting the smack down on fish is maximizing the opportunities. Being efficient, getting fish up the hole, getting the fish unhooked and getting that lure back down to the fish is paramount. What kind of bite, how the fish respond, how far you have to pull fish and how deep of water can all be considered when choosing lures and rod designs to maximize your efficiency when ice fishing perch.

On the best bites in less than twenty feet of water, single hook spoons like the Northland Tackle Forage Minnow are very efficient because they drop down fast but the single hook and shape of the spoon makes popping the hooks out of fish extremely fast. In fact you can bend the hook out slightly and often get fish unbuttoned by just letting the fish hit the ice hard. Typically, however there are compromises as the fish are not suicidal and have to be worked.

Slightly tougher bites often call for a spoon or lure with treble hooks. The advantage of a small treble hook on a tougher bite is that the hook is pointed towards the fish regardless of direction the fish approaches the lure and the fish do not have to suck in the lures so far before you can set the hook with a decent batting average. When ice fishing perch on lakes where they are really keying in on invertebrates like blood worms or scuds, small horizontal jigs get bit more but anything small takes longer to get back down on top of active fish. If you have to go small, definitely use a fast dropping jig like a Hexi-Fly or Tungsten Fireball.

Here is something else to consider when using lures. When you are not marking fish whether you are popping from hole to hole or sitting over one location, work that lure hard to pull fish in. Perch are curious and you can often pull fish from a considerable distance. Also, when ice fishing perch you can pull fish over to you and also pull fish up off the bottom high, you can often create a more aggressive feeding window. One of the best baits for pulling perch and getting fish wound up high off the bottom is the classic Salmo Chubby Darter. 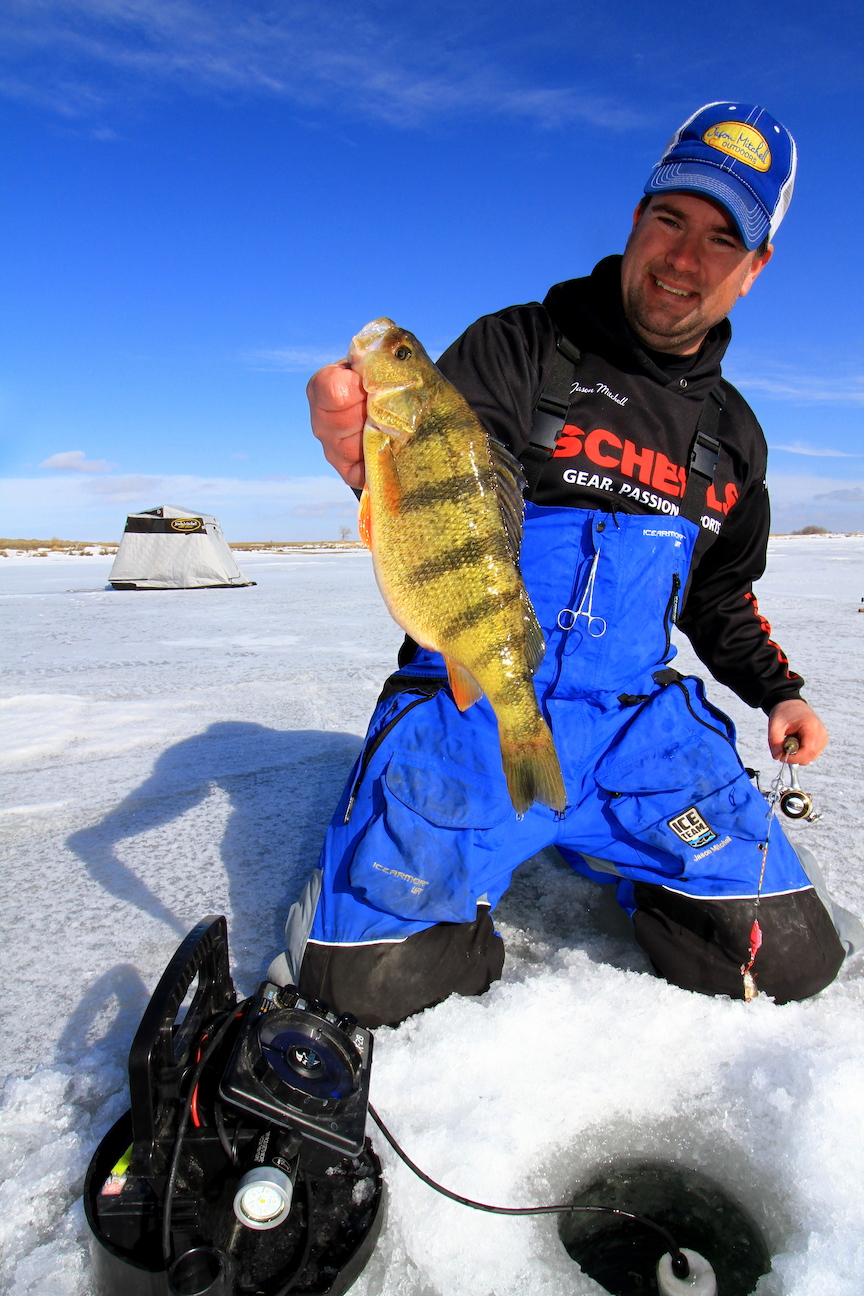 When you get fish under you, lift the fish if possible. If you can change the shape of the school so that they start to stack up vertically versus horizontally, you are going to catch way more fish. Sometimes when you set the hook on a fish and reel the fish in, the commotion scatters the fish. These fish are typically not overly aggressive and you will have to take what they give you. Often however, when you reel in a fish, another fish or two follow up the fish you are reeling a short distance. These fish are primed to be worked over. The easiest way to manipulate the aggressiveness of perch and really get them wound up is to set the hook on a fish and lift it up above the rest of the fish by three or four feet and just let the fish fight. Let the ice fishing perch fight until more fish start rising up to the fish that is on the end of the line. After these fish are up off the bottom, bring the fish in fast and get back down fast. You are going to be greeted by a few eager fish that typically hit you before you can get the bail closed.

Sometimes, perch seem to have attention deficit disorder where they just don’t stop moving and during the short duration of time that it takes to reel in a fish, unhook the fish and get back down, the fish are already moving on. When fish are burning through spots fast, what can work well is to hook a fish and just leave the fish up off the bottom and fish out of a second hole. When ice fishing perch one fish can sometimes keep the rest of the school around. Using a team work strategy with a buddy can also monopolize the situation further as well as you can always keep a lure in the water.

On torrid bites, use a fast action graphite not just for sensing the bite and getting good hook sets but you can spin the reel handle faster and get that fish up to the top fast which speeds up turn around time. Our 26 inch perch rod and 24 inch walleye rod in the Jason Mitchell Elite Series line up are perfect. On a tougher bite where the fish have to be coaxed more, I don’t think there is a better rod on the market than the classic 28 inch Meat Stick when ice fishing perch which was also developed in our line of rods. Match the rod to what the fish are showing you to maximize your efficiency.

Finally, get in tune to what you are seeing on your electronics. On the toughest bites where fish are picking up invertebrates out of the mud, an underwater camera like the Vexilar Scout is going to give you an edge. Most of the time however, I am staring at my trusty FL-22. You just cannot beat the information that the raw analog signal gives you on this unit. You can look into the bottom and tell if fish are cutting across the cone angle on the edge and also tell if fish are accelerating or changing their body posture. Other sonar units only show you a line where as the Vex gives you so much more intel if you learn to use it.

Combine all of these factors when ice fishing perch to make the best decisions and good decisions regarding matching up rods, lures and strategy with what the fish are giving you makes you more efficient. If the target is jumbo perch this winter, the folks who are the most efficient typically come off the ice with a heavier bucket.