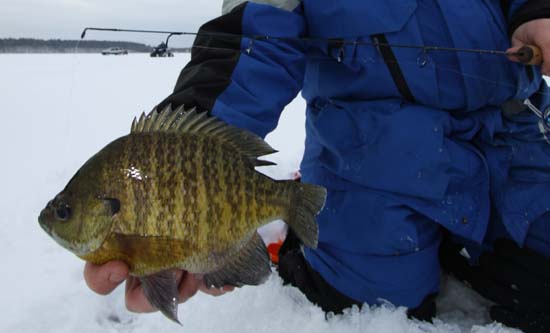 Plan ahead, drill and get things draining and you’ll catch more panfish than ever this time of year By Mitch Eeagan.

It’s last call. No, it isn’t 2 a.m. at your favorite watering hole. You just got a phone call from your bud fresh off the hard water letting you know the short-lived season of last ice fishing is peaking – now.

“You’d better get on the lake immediately, before ice conditions deteriorate to the point where you’ll have to wait until open water to catch your next limit of panfish,” he orders.

Your plan? Surprisingly enough to your comrade, it’s not to fish right away — or even tomorrow morning.Instead, you’ll be waiting at least another 12 hours to drop a line. You know that preparing ahead of time will get you more fish than if you walk right out and start fishing.Sure, you’ll be hitting the ice right away. But when you do, you’ll be preparing the lake’s surface for the next morning’s trip by boring as many holes as you can muster. After all, the stealthier you are when you have a rod in hand, the better your chance at landing a last-ice limit.But it’s not just the spooky fish factor that has you getting ready ahead of time. You know you need todrill and get things draining. All that melt water gushing through the ice creates a manmade current,gets food flowing and attracts fish – fish that you are going to lower the hammer on tomorrow.

High and mighty The fact that targeting panfish of all species is a popular pastime this time of year is not ice-shattering news. But more often than not, jigs are dropped and allowed to pass right by the most active fish in the lake.

What many of the most avid of ice anglers don’t realize is just how good the bite is mere inches underfoot. When the first warming trends of spring creep in and threaten to run winter out of town, runoff from melting ice and snow bring on a high-and-mighty bite just beneath the surface.

Melt water runoff is highly oxygenated in comparison to the water that’s been surrounding the fish since mid winter. This combination of high oxygen levels and flowing water gets fish moving, which is the first key to the magic of a runoff bite. The second is increased metabolism.

The more energetic the fish, the more they’ll need nourishment. Don’t you love it when a plan comes together? As for the sustenance panfish are seeking, it’s not only the usual creepy crawlies like aquatic insects and crustaceans, but all the goodies that come rolling in with the flow as well.

Effect of surface of ice on late ice fishing

The surface of the ice has collected all manner of food items over the long, cold winter, including non-aquatic insects (yes, many have been flying and dying all winter long), spilled bait, carrion, bird and animal droppings, and leftover morsels dropped and forgotten by anglers.

All this nourishment attracts attention and jumpstarts the aquatic food chain. Creek and spring inlets are prime places to start your late ice search, because fish may already be congregated around these flowing water areas. The north end of the lake is always a good bet too, as the sun’s southern path through the sky causes this side of the lake to heat up and begin flowing first. 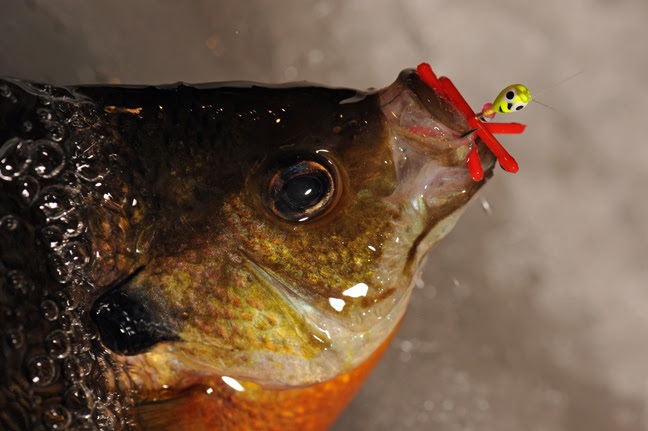 But don’t neglect any features that cause a flush of water. On lakes where spearing is allowed, for example, the large manmade holes in the ice are opening back up. More importantly, however, water is flowing back in.

It was just such an observation that intrigued avid Michigan angler, Steve Knaisel, who came across an old, inundated spearing hole and dropped his line. The results were astonishing. “The second my jig hit the water a crappie would attack it,” says the proprietor of Pilgrim Village Fishing Shop in Cadillac, Michigan. “And every old spear hole we tried had a small school of fish in it.

But the fish were easily spooked, so we had to modify our tactics,” continues Knaisel, who explained that such tactics involved drilling new holes in the immediate vicinity and then vacating the area until the next day. And so, Knaisel bored hole after hole with his Jiffy power auger and walked into the sunset.

By mid morning the next day — after the sun was up and melting the top layer of snow and ice — Knaisel revisited the trap he had laid the evening before. This time, however, he came prepared with longer rods, which allowed him to avoid spooking the neurotic crappies by standing further back from his holes– many of which were draining so much water they appeared as mini-whirlpools.

With literally just a few feet of line out past his rod tip, Knaisel lowered his jig down through the first hole. “The jig rarely fell more than a foot before it got eaten”, Knaisel says. “But each hole was only good for two or three fish,” he chuckles. “So we’d leave each one after catching a couple, then come back to it later and catch a few more… after hole hopping for only a couple hours, we had a mixed-bag limit ofcrappies, ‘gills and sunnies,” Knaisel concludes. 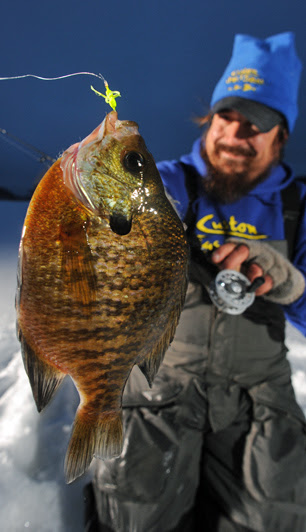 Shuffle softly, and carry a long rod Enter ice-fishing guide Brian “Bro” Brosdahl, who, atop last ice of the lakes near his home in the Grand Rapids, Minnesota area, has experienced similar “high and mighty” bites over the years. Like Knaisel, Brosdahl is a proponent of punching his holes before he actually plans to fish, but he takes things a bit further.

Bro’s arrangement of holes is simple — four to five holes surrounding the spot he’ll be standing, drilled outward from the center point approximately four feet. He repeats the pattern over a variety of fishy locations.

With his 54-inch Frabill Telescoping Jiggler Long Rod in hand, Bro is able to fish several holes in an areawithout ever having to take a step.“You can cover about as much water while ice fishing as you can in open water with this holearrangement,” says Bro. “And the Jiggler Long Rod, with its built-in reel on one end and spring bobberon the other, is the perfect rig for catching plate-size pans swimming mere inches under the ice.”

More than meets the eye Two last factors come into play when targeting panfish nosed up to a hole. First and foremost, drilling willy-nilly just any old where is not going to produce limits of fish like boring near structure will. Andsecond, using a proper jig with a slow rate of fall is a must.

Those seeking high percentage spots on which to set up flowing drains on an unfamiliar lake have a variety of tools to assist them. At the high-tech end of the helping hierarchy lies the Humminbird ICE 597ci HC Combo coupled with a LakeMaster Map Card. The real-time GPS and detailed, high-definition hydrographic maps make punching holes both productive and economical.

Even when targeting suspended fish, drill your holes as close to classic panfish habitat as possible.Weed bed edges, stump fields and rock piles should all get the nod — especially if they are adjacent tosubmerged points, humps or islands. With the aid of a LakeMaster Map Card and GPS, you’ll see the details of what lies below and be confident you’re drilling out the best spots on the lake.

Fish tickling their dorsal fins on the ice won’t show up on your electronics, so flashers and other sonar units won’t offer their normal utility. If you aren’t getting bit, don’t leave right away. Instead, drop down the camera of your Aqua-Vu AV Micro Plus with DVR and see firsthand if there are any fish within biting distance.

Last but not least is the offering. A jig that falls slowly will have more time in the small strike zone than one that drops too fast. Jigs like Custom Jigs & Spins’ Rat Finkee and Nuclear Ant—with soft-bodied plastics already skewered on the hook—fall slowly and have a silhouette that mimics real morsels of food.

Because the bite is often immediate when fishing the flow, there’s usually no need to tip jigs wit live bait. Tipping a soft plastic—like Custom Jigs & Spins’ Micro Noodle—wacky style (hooked throughthe midpoint its body) will slow the fall even more while adding a profile panfish have a hard timepassing up.

Flow me a hole Looking to land more panfish than ever at last ice? Find the locations holding fish first, then get to work. Drill smart, let ‘em flow and come back later armed with the proper gear. And when you do start fishing, forego a search of the water column and remain content right below the hole. Just be ready to set the hook.

Mitch Eeagan is an outdoor writer who lives off the land and waterways near his home within the cedar swamps of Michigan’s Upper Peninsula. Photo captions: LastIce_Bro_Jiggler.JPG – Ice guide Brian “Bro” Brosdahl readies a Frabill Jiggler Long Rod for last-ice dipping, dabbling and seizing of crappies, ‘gills and sunnies.

LastIce_Gill_WhackyRig – When rigged “whacky style”, one to three Custom Jigs and Spin Micro-Noodels will slow the fall of any finesse jig, and gives a perfect presentation to panfish suspended just below the surface.

LastIce_NuclearAnt.JPG – No tipping required – the lure’s “legs” give Custom Jigs & Spins’ Nuclear Ant plenty of action as well give the jig the slow fall required for panfish suspended just below the hole.