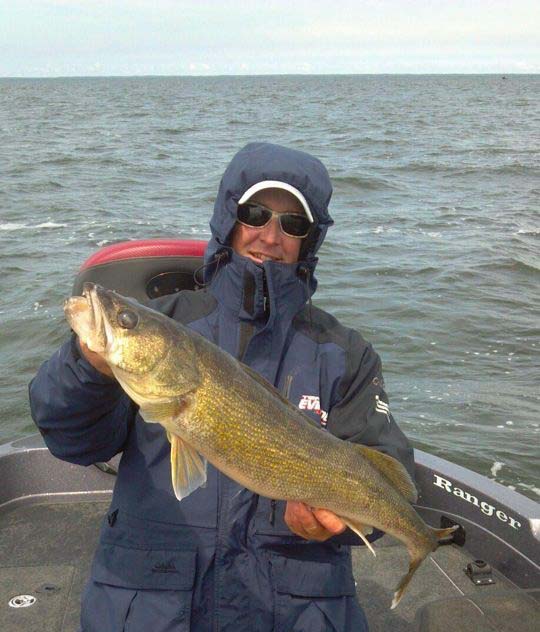 by Ron Anlauf
Things change, that’s the way it is. There usually isn’t much you can do about it either, except maybe adapt. When it comes to clear water walleye angling there have been plenty of changes, including water that has been getting clearer and clearer. Some of it has been good and due to more diligent efforts to clean up the environment like restricting agricultural runoff and limiting drainage from leaching septic tanks all of which can add to a lake’s fertility and produce more algae blooms and reduce visibility.

The bad has been the spread of invasive species like zebra mussels which filter nutrients from water and can sterilize a system and limit the amount of forage available to plankton which feeds minnows, immature perch, as well as young of the year walleyes. Even so it’s the way it is, at least for now. Hopefully in the near future there will be an economical way to eradicate the zebra mussels and the other similar species that have been raising havoc with natural plankton production, water intakes, native species etc. Until there is a fix we will just have to adapt if we want to keep catching clear water walleyes, and bottom-line that’s what it is all about.

Humminbird Pro Kevin McQuoid has seen his share of changes, even on his home lake; Mille Lacs Lake in East Central Minnesota. Kevin on the change: “In years past the fish would move shallow in late summer and early fall but we haven’t had a good shallow bite in a number of years. Now the clear water walleyes stay deep, out in the main lake basin. They can still be caught and the fishing is actually pretty darn good late in the summer and into October, it’s just that action isn’t where it used to be.

Instead of slip-bobbering shallow rocky reefs in four to eight feet of water with jigs and leeches we’re trolling with crankbaits and leadcore in thirty to thirty-five feet of water. It’s hard to say what is the real culprit but the water is definitely clearer now and the zebra mussels have something to do with it. Another consideration is the proliferation of smallmouth bass which have been increasing in number and rule the shallow water structure which may be contributing to clear water walleyes staying out deep late into the fall.”

The clear water effect has been in full force on the Great Lakes for years and has been cycling. Ranger Pro Mark Courts of Harris, MN has seen lakes like Erie clear up and then darken after a big zebra mussel die off. Mark on the cycle: “It seems the mussels eat themselves out of house and home until there is a big die-off. After it happens the water darkens up a bit until the mussels establish themselves again. I’ve even seen piles of dead zebra mussels on Mille Lacs and may be the start of the same type of Great Lakes cycle.”

Trolling with leadcore has become a much more dominant technique among pros and tournament anglers and is being picked by more and more weekend anglers. It’s being accepted because it works; plain and simple. Courts relies heavily on leadcore and has used it from Mille Lacs, to Green Bay, and to Lake Eire. Mark on getting down with lead: “Leadcore seems complicated at first but is actually easy to use. The key is getting a bait to run at the right depth and there are some rules of thumb to help get you started. For starters I like to use a longer fluorocarbon leader when fishing clear water, up to 50’ in length. That 50’ of line will allow a diving bait to dive to its normal diving depth on a trolling run which may be 8’ or more depending on the type of crankbait I’m using.

Then you can figure you can add another 5’ feet of depth for every color of lead you let at out at 2mph. Faster trolling speeds achieve less depth and slower speeds result in more. To give you an example; If I want to get to 23 or 24 feet of water I’ll tie on a #7 Flicker Shad and let out the fluorocarbon leader and another thee colors of leadcore and expect to get into that range at 2 mph. It’s not an exact science but you can get pretty close with a little practice.”

Finding basin clear water walleyes can be a challenge when there are a lot of potential hot spots and is when good electronics can really help narrow it down. McQuoid on running down basin fish: “The nice thing about the Humminbird is the fact that you can actually mark fish holding off the bottom at 20mph or more. They won’t look like the classic “hooks” but will look more like a spike, or an up and down line. If you’re seeing spikes you better slow down and take a closer look. Thicker marks off the bottom are quite possibly walleyes and are likely to be active which means they can be caught. Fish close to the bottom don’t spike all that well and may or may not be active enough to take a bait.”

Besides the basin clear water walleye bite another pattern on Mille Lacs that has been becoming stronger and stronger and is actually happening in relatively shallow water. Courts on staying shallow: “The weed bite on Mille Lacs has been phenomenal the last few years and really starts early in the season and lasts right into the fall. Clear water walleyes will hang out in the deep cabbage and coontail where they can be readily caught and are surprisingly aggressive at times.

Productive techniques include pitching jigs and plastics like the new paddle tail swim baits into the weeds, along the deep edge, and right over the tops where you can “swim” the bait back in. I like to use a braided line with a fluorocarbon leader for my jig work and prefer jigs with a 2/0 or 3/0 hook. Another option when the fishing are really active is to work a jerk bait like a suspending Husky Jerk over the tops of the weeds with a twitch, twitch, twitch, pause retrieve. Another shallow water option even in super clear water is working reed beds early in the morning. Clear water walleyes will move in during the low light period of early morning and are there for one reason; to fill their bellies.”

In summary; to have a good shallow water bite in clear water you better have some deep growing green weeds. Otherwise deep may be the way to go and trolling may be the only answer to getting your pole bent enough times to keep you happy with those clear water walleyes. See you on the water.