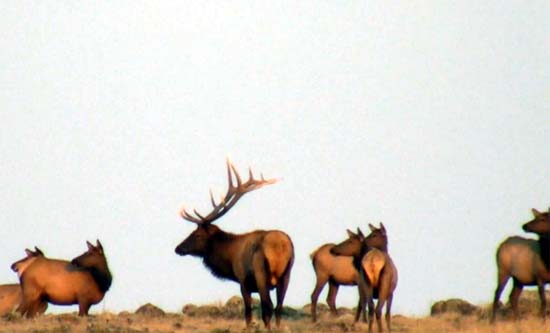 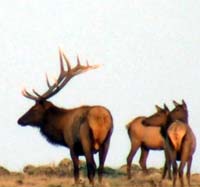 Where do I start? This was one incredible hunt ever for me. My brother in law pulled the tag and I video taped for him. We were in Wheatland WY and it was warm every day. After arriving Friday evening we had dinner and got to bed early. Morning number one on Ranch #2 of 3000 acres. A high prairie type of setting just over 8000 ft of elevation. We parked near fishing pond and hoofed it in.

As the sun started to come up we were on a small herd of spread out cows, two spikes and a decent rag bull. After a quick decision we were going after this rag bull a decent 6×6. The herd was around 1/2 mile away and feeding slightly towards us. We made a break for a creek and started working our way to the NE. We were almost immediately busted by a spike on a hill behind us. We lay in the grass for him to feed on and then make our move to a raised rock pile with some pines on it.

Brian and Chad Berens one of our guides made it to a good spot as the our other guide Jon Keil and I make it to a small raise with some good tree/ rock cover to put up the decoy and call. Everything was right as the herd fed towards us and closed the distance. They started bedding down at 70 yds right in front of us. This bull was rutting pretty good and keeping his cows tight. Calling and calling he wouldn’t budge from his group of cows and after a 2hr wait they moved on without a shot.

We regrouped and found our way to a nice steep advantage under srome tree coverage and found a group of 300+ just off the property with 5 nice bulls and one mac daddy with white tips. We figured it kind of odd that these bulls were not rutting very hard and pulling cow out of there. After admiring this huge group we noticed a small rag bull 400 yds to our right feeding our of a nice lush draw along a creek bottom. We weren’t sure if we going to take him but wanted a closer inspection. To get the wind right we make our way back to the south and up on top of 100ft or so cliff and looked down to find two spikes some cows and this rag bull.

He wasn’t that big but wanted to practice to see if we could get withing distance for a shot. We worked our way down the rocks and into the bottom Jon and I set up about 60 yds away and Brian worked his way into about 45yds. After calling this rag a 4×5 worked his way around and then just bedded down 40 yds from Brian. The wind finally swirled and the cows took off pulling everything out of there. We made our way back for lunch and then drove to a neighbors ranch that overlooked ranch #1. I spoted a NICE 6×6 so we made a plan for the folling morning and went to have dinner.

Day two. I was not ready for this. Our guides in their mid 30’s who are acclimated to the the lack of oxygen take us two 40 year olds on a hour long death march up a mountain road. All scentloc and spray in the world was not going to keep us from stinking. As we climb on top of a nice vantage point 80ft above a meadow we start glassing. Little did we know that there were three bulls about 40 yds from us until one of us had to take a leak. Fire drill #2 breaks out dropping the packs getting out and around of the wind to set to start calling. Nothing. These bulls just looked our way and kept feeding off to the NE. Myself and Chad stayed put as Brian and Jon take off after them. 45 minutes later the 3 bulls appear way off in the distance aftert they had hit a wallow. Two of them caked in mud and the third meander over a hill as we finally see the rest of our group making their way back up a draw. Onto evening #2 Same spotting point and the big boy with 8 cows and calves is still in Normans Draw. We have 3 hours of light so we drop Brian and Jon down the road and they take off up Bobcat draw. A vertually vertical climb of around 600 and 2 1/2 miles to cover. Like supermen they made the climb fast. They get on top and make their way over to Normans draw but can’t get close to the Bull without blowing out the cows. So a nice decent in the dark for them with no luck.

Day 3. Death march number two for me in the dark. Can’t breath want to puke. Walk ranch #1 until 11 am. Tons of pronghorn, nice mule deer bucks, two rams. We start working our way back setting up on top of the aspen groves in the draws calling with no replies. We work our way down the third aspen draw after calling and bust a small group of cows and a rag bull in a wallow. Down for lunch. Decide on Ranch #2 park and walk in. I am in awe again that we get on a decent herd after only 2 hours of waling and glassing. We put the move on these guys with a OK shooter and they catch our wind. We pushed on to the N for a while and an hour before sundown we start making our way back. BOOM some how the same herd had made their way back and the wind was at our favor with zero cover. We dropped laying in the grass on a hill side facing them. We decide to use the decoy and have the shooter and a guide try and make it to a rockpile 200 yds from us. They make it set up to start calling and the bull makes two attempts to come back to the decoy but every time the cows move on and pull him back to herd them up.

Day 4. Back to ranch #2 this morning starts off well again watching a rag bull 6×6 keeping his cows tight agains the fence line. There is no way to make a move on them so we bed down in the rocks and trees. They bed down and we notice the huge herd has broken down now by half. Still on the wrong side of the fence with Mr big white tips out keeping his girls tight and thrashing the sage brush. Our close herd gets up and feeds behind a hill and the drop is on again with decoy to make it across flat land to the pile. Before they take off we tried to decide to wait becaue it looked like he might push them up a fence line for a 20 yd shot but it was getting late and we didn’t think they would make it in time. The plan stayed with push on and make it happen. Guess what the cows did? As soon as the get to the rocks the cows made their way around and started pusing it to us down the fence line. Brian had the chance to make a 20 yd dash between rocks for a shot on the bull but thought he would get busted. Eventually they catch some wind and are off. We see two hunters off in the distance where the large herd was and they are gone. Tomorrow is the last day and it seems like this rag bull has a pattern of keeping his cows in the same general area so the decision is that we go for this rag bull on the last day and we need to get some meat.

Day5. Park twice as far away and walk in at zero dark thirty. The drive in there is a herd in the meadow along the road. They are heading to ranch #2 good sign. This morning bulls are buglng like mad. We think we can see our small rag bull. Bugling seems to be all around us. As we work our way in the dark towards the sound of the bulls the sun starts hitting below the horizon. Jon stops in his tracks after looking through his binocs and say “big herds on our ranch”. We start glassing and can see a decent bull working a huge herd our way. We don’t have much time. Low light and we are halling A$$ down a creek and have to stop. Cows on the hill, no more cover for us. We belly crawl 80 yds to some trees and have to run hunched over to get down into a steep gulley. This is where the mission impossible theme song starts going through my head. Running along game trails on a rock face with a pond 40 ft below us. Sliding down huge boulders and hoping to spot without falling to the bottom. We come out and around of this gulley to get to the top and the herd has moved back to our left and split up on a finger feeding towards us. We have to make our way back through a different valley and bust a 6×6 bedded down 20 yds form us. He has about 24″ of arrow sticking out of his right shoulder. All I could think is please don’t push everything off with you… We make it to the opening of the draw. slight incline to the straight out and to the right with just sage brush. We drop our packs and I set up the camera. They are right over the hill. Brian and Jon make there way up this sage brush wash and Chad climbs 8 feet to the left into the rocks to watch.

I have the tripod all set up camera rolling. Then it dawns on me just as I see the backs of some cows feeding off to my front right that I am in the middle of the open with no cover. You know whats going through my head all SH!&! I somehow make it without getting busted behind a decent boulder and piece of brush.

Oh yeah afer we recovered the bull who was double lunged at 50yds he went 20 yds!!!! All of his cows were making a ruckus and 6 bulls started running in from everywhere. I also have footage of this form another camera. A Drop tine bull and multiple bulls ran into this herd to start breaking it up with in 10 minutes and 200 yds from us. It was crazy to watch. Many of our still camera pictures has the herd standing and watching us wondering where he was. By he way it was the herd bull Whitey as we called him who came in.

To see more on this story or comment/share on the HSO Social Network – Click here please.