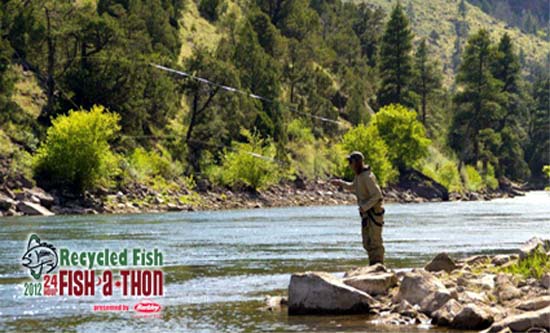 The problems facing our waters are many and varied – just like the anglers who are uniting to raise awareness for those problems, and raising money to solve them. Never before has such a large group of anglers – 50 teams across North America – joined the Recycled Fish 24 Hour Fish-A-Thon presented by Berkley Fishing. This Sept. 7 at 7 p.m., these intrepid anglers will make their first casts and then fish for 24 hours continuously – each team on its own home waters.

In Alaska, “Team Urbanite” is made up of two couples, Jarred and Renee Behrendt, and Pete and Monika Odren. They want to raise awareness about the Susitna River Dam, a $5 billion hydroelectric proposal that would dam the Susitna river to produce electricity, at the expense of a world-class salmon fishery.

“Other energy options would generate an equal amount of electricity at a lower cost without putting our valuable fisheries at risk,” says Jarred Behrendt. “We seek to educate others on these alternatives and raise awareness about the implications of building this dam.”

Several thousand miles south in California, “Team Catch and Release” is made up of brothers Sean and Ryan Gage. They love to fish – and both are autistic. That’s why they earned a $250 donation from an organization called My Little Buddy’s Boat, which bridges the gap between fishing and kids on the autism spectrum. The Gage brothers are concerned with the trash that they see at their favorite fishing spots, so they are raising awareness about cleaning it up. They’re raising funds for Stewardship Kits that they can distribute to their fellow fishermen and encourage them to be custodians of our waters..

“This event gives a voice to the boys’ passion,” says Katie Gage, the boys’ mother. “These boys care so deeply for nature. They humble me. We are blessed that they are high functioning, but they struggle. Ryan also has a rare blood disease that requires him receive treatment bi monthly through a port in his chest. When the Make a Wish Foundation offered him a wish he simply stated, ‘I have all I need.’”

Down on the Gulf Coast, Ben Weber and Jared Serigne are “Team Vanishing Paradise.” They’re raising awareness and funds to restore the Mississippi Delta, which is disappearing at an alarming rate – a football field every hour. It is one of this nation’s most important ecosystems for fish and wildlife—and one of its most endangered.

“If we don’t act soon,” says Weber, “the Delta as we know it will be gone forever, and with it a way of life. We’ll be losing an economic engine, the breeding ground for much of North America’s waterfowl and the fisheries in the Gulf of Mexico … and one of our national treasures.”

On the East Coast, four friends, Leo, Mike, Rob and Jay, make up “Team Philly Extreme Fishing.” They ply the urban waterways of Philadelphia, Pa., and what they see in the Schuylkill River worries them. Material pollution – trash – is a visible reminder of the invisible issues going on in the water. Point and non-point source pollution make the fish unsafe to eat, and hurt the population. Meanwhile, anglers harvest fish in a way that limits the potential of the fishery.

“Our goal is at the heart of what Recycled Fish does,” says team leader Leo Sheng. “Educating anglers about how to be better stewards of our waters, both on and off the water, because our lifestyle runs downstream. It’s good to remember that 50 percent of the funds we raise help Recycled Fish’s national mission, and the other half goes to help the Schuylkill River in specific, tangible ways through the Schuylkill River Development Corporation.”

Other teams are raising awareness and funds for combating invasive species in Vermont, water consumption issues in Colorado, access issues in Utah, youth fishing initiatives in Nebraska, habitat issues in Iowa, and pollution issues in Florida, to name a few.

Half of the dollars that each team raises directly funds a local solution for its local problem, either through Recycled Fish or another local non-profit organization working on the issue. The other half supports Recycled Fish’s national work to remedy the same kinds of situations across North America by engaging, educating and equipping anglers to be stewards of our waters.

At the same time, these 50 fishing teams are vying for prizes, like the fishing trips of a lifetime to jaw-dropping destinations. Spring Bay Resort on Lake Vermillion in Minnesota, FishTales Outfitting in Sheridan, Montana, and Hudson’s On The Spot Guide Service in Wisconsin, await teams that raise the most funds or catch the most fish. Other prizes from Berkley Fishing, Shakespeare, Castalia Outdoors, DICK’S Sporting Goods, Dragon’s Custom Rods, Aqua Design, and wildlife artist Curt Redden are also on the line for challenges ranging from the team that collects the most trash to the angler who takes the best “hero shot” photo.

“We couldn’t be more grateful to these anglers who are doing something so challenging,” said Teeg Stouffer, Recycled Fish Executive Director. “They all love to fish, but this is the angling equivalent of running a marathon. Now we hope that people will get behind what they’re doing to lend their financial support, and to pay attention to these critical issues. At stake aren’t just our favorite fishin’ holes. We’re talking about our drinking water.”

Although the registration deadline has come and gone for this year’s event, anyone can support the teams by visiting the Recycled Fish website. Each team has its own page, which introduces the fishing team and the water they’re fishing, the problem facing that water, and simple ways to fix that problem. Online donations to the team can be made right on that page, or instructions for paying with check by mail are available on each page as well.

The 24 Hour Fish-A-Thon action will be reported real-time through the Recycled Fish Facebook page and by following hashtag #24FAT on Twitter this September 7 & 8.

Recycled Fish is the non-profit organization of “anglers living a lifestyle of stewardship both on and off the water, because our lifestyle runs downstream.” We Are Stewards.

This is the fourth year for the Recycled Fish 24 Hour Fish-A-Thon.

Teams hail from 24 U.S. states and one Canadian province.

This is the first year that the Recycled 24 Hour Fish-A-Thon has included a saltwater fishing competition, and saltwater teams fishing in the Pacific Ocean, Gulf of Mexico, and Atlantic Ocean.

Anglers fishing around the clock and across North America to raise awareness for the problems facing our waters, and money to help solve those problems.

Fish are “scored” using regionalized scoring grids which give a score for the fish by species and length for that region.

Fishing trips include a fly fishing adventure to in Montana from FishTales Outfitting with a stay at the Buckin’ Trout Ranch; a North Woods experience at Minnesota’s Spring Bay Resort; and an Ice Fishing adventure on the Great Lakes with Jim Hudson’s On the Spot Guide Service.

Other prizes are awarded for runners-up in the fundraising and fishing categories, the team who cleans up the most trash, the largest fish of different species, best photographs, and best sportsmanship.

Teams began registering in March, and have participated in weekly challenges for a variety of prizes leading up to the event, including “mini-thons” over the Memorial Day and Fourth of July holidays.